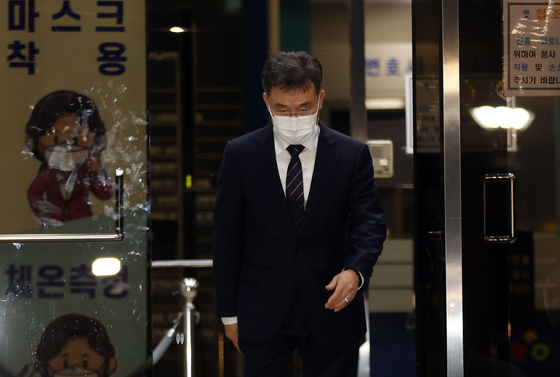 
A lawyer who worked at the Seongnam Development Corporation confessed to prosecutors on Saturday that the company's former acting president was the real owner of a minor company that benefited from a favorable profit distribution scheme at the heart of the Daejang-dong development scandal, according to a source within the prosecution service.

In a 20-page-long written statement he submitted to prosecutors on Saturday, Jeong Min-yong — a lawyer who once served as the head of the Seongnam Development Corporation's strategic project team — named Yoo Dong-gyu, the public company’s former acting president who is currently under arrest, as the real owner of Cheonhwa Dongin No. 1, an affiliate of the small asset management company Hwacheon Daeyu.

Hwacheon Daeyu is suspected of receiving political favors in the development’s profit distribution scheme, which enabled it since 2019 to rake in a profit of 57.7 billion won ($48.3 million) on an investment of 49.95 million won, which was a 1 percent stake in the project in Seongnam, Gyeonggi, just south of Seoul.

Cheonhwa Dongin No. 1, which raked in an estimated 120.8 billion won of these profits, is one company in the tangled web of alleged payouts that prosecutors are attempting to shed light on.

According to a source in the prosecution service, Jeong claimed in his statement that he heard on multiple occasions from Yoo’s deputy, who was not identified, that Yoo was the real owner of the Hwacheon Daeyu affiliate.

In his statement, Jeong said Yoo’s deputy revealed the true ownership of Cheonhwa Dongin No. 1 when the lawyer apparently lent the deputy 1.18 billion won from his company’s coffers in November 2020. When Jeong asked the deputy how he would pay the money back, Yoo's deputy allegedly told him that Cheonhwa Dongin No. 1 belonged to Yoo under a borrowed identity, and that he could find a way to return the loan.

Jeong went on in his statement to confess to receiving 2 billion won from Cheonhwa Dongin No. 4, another affiliate of Hwacheon Daeyu, through a company called Yuwon Holdings that he set up with the same deputy acting on Yoo’s behalf.

Yoo was formally arrested on Oct. 3 on suspicion of committing breach of trust and bribery under the Special Economic Crimes Act.

Yoon faces accusations that he inflicted damages on the city of Seongnam by designing the shareholder composition and profit distribution method of the mixed public-private Seongnam Park consortium, the developer of the Daejang-dong project, to favor Hwacheon Daeyu and its Cheonhwa Dongin affiliates.

Although the controversy over Hwacheon Daeyu’s outsized profits from the Daejang-dong development project was initially sparked by speculation over the company’s owner, Kim Man-bae — a former journalist who interviewed ruling Democratic Party presidential candidate and Gyeonggi Gov. Lee Jae-myung — Yoo’s arrest has drawn attention to a new dimension in allegations concerning the governor’s role in the project.

Lee, who was mayor of Seongnam at the time the project was organized, touted the development as one that would provide apartments for 5,903 families in the Seoul-Gyeonggi metropolitan area, home to over half of Korea’s population.

While Lee has adamantly denied any involvement in the project’s profit distribution scheme, Yoo previously worked on Lee’s Seongnam mayoral and Gyeonggi gubernatorial campaigns, leading to accusations from the main opposition People Power Party (PPP) that he has a closer relationship with Lee than the DP presidential nominee is willing to admit.