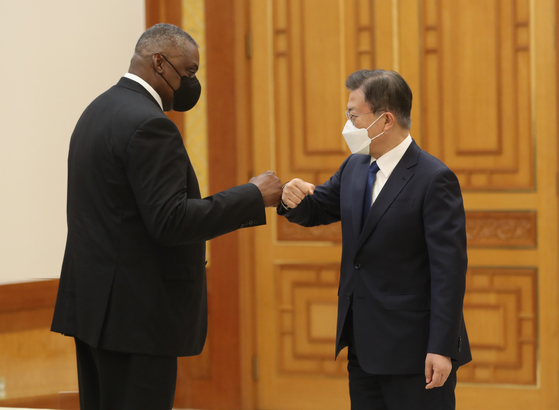 
The full operational capability (FOC) assessment required for the pending transfer of wartime operational control (Opcon) from the U.S. military to South Korea will take place this coming summer, according to the Defense Ministry on Tuesday.

Defense Ministry spokesman Boo Seung-chan told reporters at a press briefing that the country’s military authorities are in “close discussions” with their U.S. counterparts over the timing of the FOC assessment next year.

However, U.S. Department of Defense spokesman John Kirby said in a briefing at the Pentagon on Monday (local time) that Defense Secretary Lloyd Austin agreed to proceed with the FOC assessment next summer during his visit to Korea earlier this month and review progress on the Opcon transfer conditions in the autumn.

The remarks from the Korean Defense Ministry and the U.S. Defense Department come after Defense Minister Suh Wook said in a Monday interview with KBS Radio that Austin had ordered an earlier review of the Opcon transfer in the spring.

During his visit to Seoul, Austin said that the Opcon assessment would take place autumn next year, but the timing of the evaluation once again became subject to negotiation between Won In-choul, chairman of the Joint Chiefs of Staff, and Gen. Paul LaCamera, commander of the U.S. Forces Korea (USFK), after President Moon Jae-in mentioned the possibility of an earlier assessment.

Moon’s administration has pressed the issue of transferring Opcon back to Korea on multiple occasions, reflecting its position as a key item on the president’s defense and diplomatic agenda.

The president asked LaCamera to pay attention to several pending alliance issues, such as the Opcon transfer and the return of the U.S. Army base in Yongsan District, central Seoul, upon LaCamera’s appointment to his post in July.

Minister Suh reiterated that same request to LaCamera a few days later, asking him to help speed along the Opcon transfer during his tenure.

The FOC assessment is the second phase of a three-part verification process to determine if South Korea is ready to lead the allies’ combined forces in wartime.

Although President Moon Jae-in wanted to accomplish the Opcon transfer before the end of his term next May, the scheduling of the FOC assessment for next year — following a long delay due to the Covid-19 pandemic — will likely leave the third and last part of the verification process, a full mission capability assessment, unfulfilled before he leaves office.

South Korea has not held wartime Opcon since the 1950-53 Korean War, when it handed all operational control over its troops to the U.S.-led United Nations Command. Opcon was subsequently transferred to the U.S.-led Combined Forces Command (CFC) when the command was launched in 1978.

The Opcon transfer was previously set for 2015 but was pushed back in 2014 as North Korea escalated its nuclear and missile weapons tests.