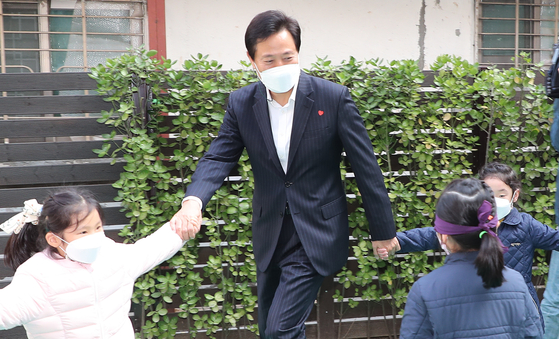 
Seoul City will expand its joint child care model that binds together public and private day care centers throughout the city and will pay caregivers at the centers, Mayor Oh Se-hoon declared Tuesday.

According to Oh’s mid- to long-term master plan for child care services in Seoul announced Tuesday, the capital city will invest a total of 670 billion won ($566 million) until 2025 toward revolutionizing its day care services.

Under the new plan, the city will expand its “Seoul-type joint day care center” model to all districts in the capital city next year, with a total of 400 daycare centers scheduled to participate by 2025.

The city’s day care center plan is a joint child care model constructed by Mayor Oh as a way for public and private day care centers to share their resources and offer standardized care to solve excessive competition among the centers and to reduce the long waiting lists for admissions concentrated in public day care centers. A major child care project by Oh, it has currently been implemented at 58 day care centers throughout eight districts in the city.

Oh also said the city will increase the number of day care centers run by the state or local government from the current 35.6 percent to 50 percent of the total by 2025. It also plans to expand child care services during the night, services for emergency circumstances, and those for multicultural and handicapped children.

In order to improve the teacher-to-child ratio issue, a common complaint regarding child care facilities, the city will cover the entire labor costs of newly hired child caregivers.

Pilot tests for the financial aid plan have already started on a limited basis at some centers but will be expanded gradually to include public and private day care centers for classes with kids 0 to 5 years old. The class size for toddlers between ages 3 to 5 are expected to be reduced from 15 to 20 people to 10 to 15 following the implementation of the financial aid.

The city will also give financial support for the hiring of teachers' assistants in the case that a full-time teacher takes a vacation, the first in the country to adopt such policies.

The cost of meals and snacks at day care centers will be raised to the same level as kindergartens. The daily cost of infant meals and snacks will be set to 2,997 won ($2.50) and those for toddlers at 2,090 won — up 497 won and 190 won, respectively.

“Children are our future, and child care is the key to opening that future,” Mayor Oh said.

“With the spread of a positive perception of childbirth, parenting and child care among Seoul residents, Seoul's problem of ultra-low fertility will be solved, and the city’s child care model will become the standard for future child care in Korea.”