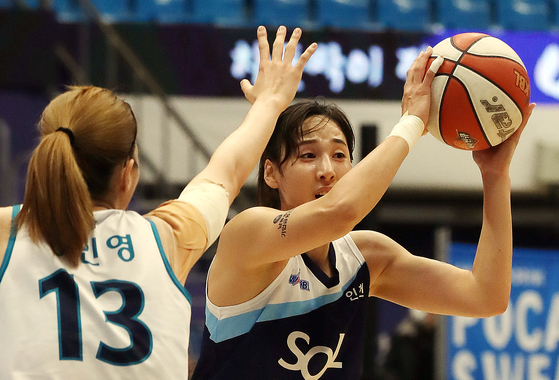 Kim Dan-bi of Incheon Shinhan Bank plays the ball against Hana One Q on Monday at Incheon Dowon Gymnasium in Incheon. [YONHAP]


Kim Dan-bi of Incheon Shinhan Bank topped the All-Star fan vote for the 2020-21 season on Monday, marking the first time in WKBL history that a player has received the most votes for six consecutive years. The accolade won't come with any time on the court, however, as the WKBL announced Tuesday that the All-Star game is canceled.

Kim received 18,947 votes, according to the All-Star fan vote count released by the WKBL on Monday. This is her 13th time being voted to the All-Star team since the 2009-10 season. Kim had 330 votes more than runner-up Shin Ji-hyun of Hana One Q.

Five Shinhan players made the All-Star list, alongside four from Woori Bank and three each from Samsung Life Insurance, BNK, and the KB Stars.

All-Star title selection is based on fan votes. In a normal year, the 20 All-Stars would then be ranked based on the number of votes they receive and then divided into two groups for the All-Star game. The player with the most votes is joined by the third, fourth, sixth, seventh, eighth, ninth, 10th and 11th placed players, while the remaining nine join the runner-up on the other squad.

However, this season's All-Star game, which was scheduled to be held at Yongin Gymnasium in Yongin, Gyeonggi on Dec. 26, was canceled on Tuesday due to concerns over the growing number of Covid-19 cases in Korea.

The selected player's will receive All-Star trophies delivered individually at their respective team games, starting on Wednesday at the match between Busan BNK Sum and Asan Woori Bank Woori Won. The next match between Samsung Life and Hana One Q will take place on Thursday then KB Stars and Shinhan will face each other on Friday.