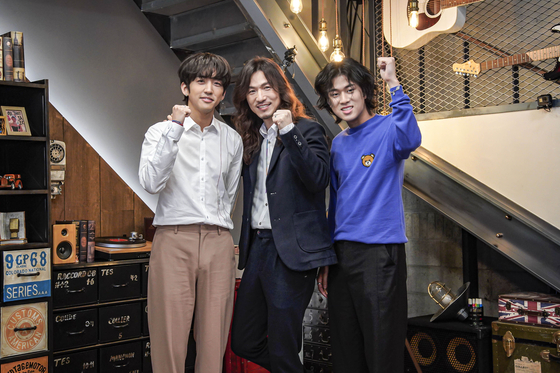 
They started from admitting they were "nameless" singers, but winners of JTBC's audition program "Sing Again" will now sit down with Korea's biggest stars as equals and fellow musicians for the new spin-off series "Famous Singer" (translated), set to air its first episode tonight.

The first episode of "Famous Singer" (tentatively titled in English) will air at 9 p.m. on JTBC with Lee Seung-yoon, Lee Mu-jin and Jeong Hong-il — the three winners of "Sing Again" — along with Super Junior's Kyuhyun and comedian Lee Soo-geun who will host the show.

"We planned the program when the top three contestants were gaining a lot of popularity and people said they were sad to see the show end," said chief producer of the program Yun Hyun-joon during an online press conference held on Friday afternoon.

"Coming up with a spin-off program for an audition wasn't easy, but the three contestants were hoping to show more to viewers and we thought it was our duty to show that."

The program will feature the five stars sitting down with some of Korea's biggest singers to share the stories of their lives and music. Singer IU will honor the show with her appearance on the first episode.

"These top three contestants have just become famous but the people who will be appearing on the show will be legendary," said Yun. "Our goal is to put them together and see what vibe that new encounter will bring."

Yun added that the three contestants are not only fantastic singers but also "talented talkers" and asked for people to tune in to find out more.