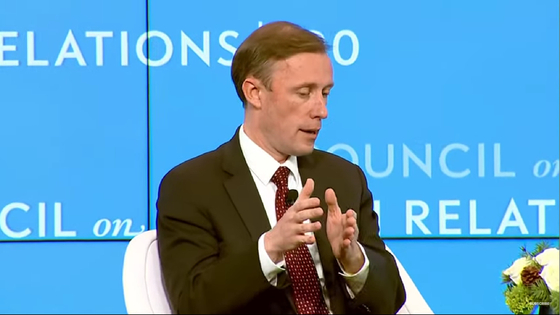 “Our approach to North Korea when we came in was to look at the last two administrations,” Sullivan said, speaking with the New York-based think tank on Friday.

Addressing the strategic patience strategy of the Barack Obama administration, or the “none-for-none” approach, and the grand bargain strategy, or the “all-for-all” approach, of the Donald Trump administration, Sullivan said, “the thrust and purpose of our policy was to come in between those two, to be prepared to engage in diplomacy, to make step-by-step progress towards the ultimate goal of denuclearization of the Korean peninsula.”

Sullivan’s statement was a reiteration of the Joe Biden administration’s announcement of its approach to North Korea in April.

He admitted, however, that the Biden administration’s approach has not led to “traction in diplomacy with North Korea.”

“When I say we haven’t gained traction, we have not sat down with North Korea this year to have that conversation,” Sullivan said. “We have communicated our willingness and readiness to engage in that diplomacy.”

Sullivan emphasized that the U.S. government is ready to engage with the North to follow-up on their agreement from the Singapore summit in 2018.

“We continue to indicate to them both directly and publicly as I am doing right now that we are prepared to engage to try to make progress against the basic points that we laid down in the Singapore summit back in 2018,” he said.


At the 2018 U.S.-North Korea summit in Singapore, then-U.S. President Donald Trump and North Korean leader Kim Jong-un signed an agreement that pledged joint commitments to denuclearize North Korea, establish normal relations and work toward a peace settlement, and the recovery of the remains of U.S. soldiers on North Korean soil.

The last dialogue between Washington and Pyongyang was the 2019 summit in Hanoi, Vietnam, which ended without a deal. Trump wanted the North to take measures beyond shuttering the Yongbyon nuclear complex, while the North demanded partial sanctions relief.

North Korea has since refused to engage in denuclearization negotiations with the United States, citing what it characterizes as U.S. hostility toward Pyongyang.

In the current U.S. administration’s approach to North Korea, which the Council on Foreign Relations President Richard Haas, who moderated the conversation, said could be coined the “something-for-something” approach, North Korea is not to be offered incentives, such as relief from sanctions which the regime has been requesting repeatedly as a precondition to talks, just for the sake of dialogue.

The Biden administration has recently been highlighting the human rights violations of North Korea, imposing fresh sanctions earlier this month on Pyongyang’s new Defense Minister Ri Yong-gil and other entities in North Korea for their connection to human rights abuse and repression.

The U.S. Ambassador to the United Nations Linda Thomas-Greenfield, with five other representatives of UN Security Council member states, called last week for an open session at the council to address the North Korean human rights violations. The council has held private meetings on the issue since 2018.