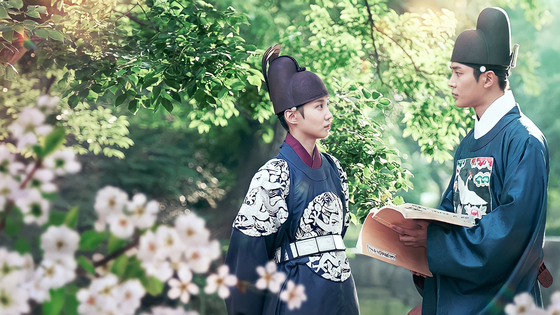 The recently-ended KBS historical series “The King's Affection” is set in the Joseon Dynasty (1392-1910) but features entirely fictional characters, even the king. [KBS]

"The King's Affection" is set in the Joseon Dynasty (1392-1910) but features entirely fictional characters.

Heavy fictionalization and emphasis on romance rather than true events are general trends seen in recent historical K-dramas, leading some viewers to question how truly "historical" they are.

"The King's Affection," set under the reign of a fictional king, tells the story of a princess who dresses as a man in order to become the crown prince and succeed the throne.

“The King's Affection,” set under the reign of a fictional Joseon-era king, tells the story of a princess who dresses as a man in order to become the crown prince and succeed the throne. [KBS]


Currently-airing series "Secret Royal Inspector & Joy" on tvN and "Moonshine" on KBS are both set in the Joseon era but do not feature any real historical figures. And while MBC's "The Red Sleeve" does center around King Jeongjo (1752-1800) of Joseon and his concubine, it focuses on their highly-romanticized personal relationship rather than history.

Separate from their commercial success, domestic viewers largely consider such shows to simply be K-dramas in traditional costumes, not actual historical shows. Although period dramas with fictional elements have always been popular in Korea, the trend has been made more prominent as authentic historical dramas have declined in popularity and become few and far between over the years.

Especially because historical K-dramas are growing popular abroad, some express concerns about whether they really represent Korean history. 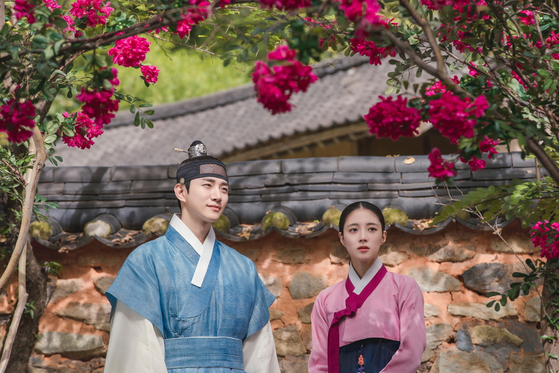 MBC’s “The Red Sleeve” centers around King Jeongjo (1752-1800) of Joseon and his concubine, but it focuses on their highly-romanticized personal relationship rather than history. [MBC]


"I know there's such thing as artistic license, but I can't help but feel a little skeptical as a historian," said Ban Byung-yool, an emeritus professor of history at Hankuk University of Foreign Studies. "When 'historical' dramas only deal with fictional characters and events, I fear that viewers may not take authentic history seriously or think of actual historic events as unimportant.

"I believe the purpose of a historical drama is to convey lessons from the past," he continued. "Even if certain historical figures lived centuries ago, the tribulations they went through are still quite universal and relatable. Their true stories can give messages that transcend time. But if everything is fiction, viewers are only left with romance and costumes. That's the side effect of prioritizing entertainment over history."

"I'm not saying TV shows must be strictly factual like academic papers, but there needs to be a certain level of historical accuracy," he said. "If a show is set in the 1800s but characters behave like it's the modern times, that's anachronism. I doubt such highly fictional shows will make either domestic or foreign viewers interested in actual Korean history, and some might even take historical inaccuracies as the truth." 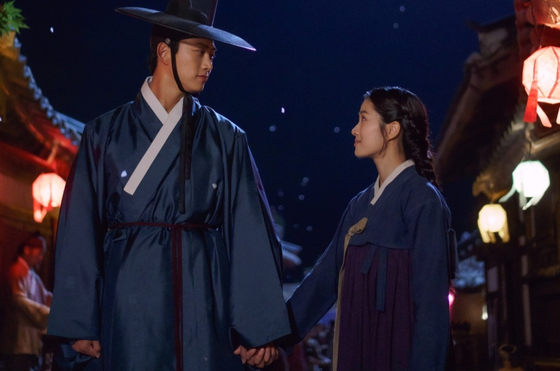 TvN’s currently-airing “Secret Royal Inspector & Joy” is a fictional story about a Joseon-era undercover agent of the king and a divorcée. [TVN]


On the other hand, Professor Park Chan-seung of Hanyang University's Department of History had a different view on the role of period dramas.

"I expect historical dramas to promote Korean [traditional] culture rather than history," he said. "In that sense, even fictionalized historical dramas are meaningful. Complete fiction may actually be better to avoid distorting history or receiving complaints from descendants of real historical figures, which has happened quite often when they were portrayed negatively in a series. Fictional characters give screenwriters much more creative freedom."

Park also pointed out that fictional period dramas are a trend worldwide.

"We're seeing this phenomenon in Japan and the West as well," he said referring to the Netflix series "Bridgerton" (2020-). "There's no rule that historical dramas must adhere to authentic history, which tends to be too serious and unexciting. The time period can simply set the premise for an interesting story to play out." 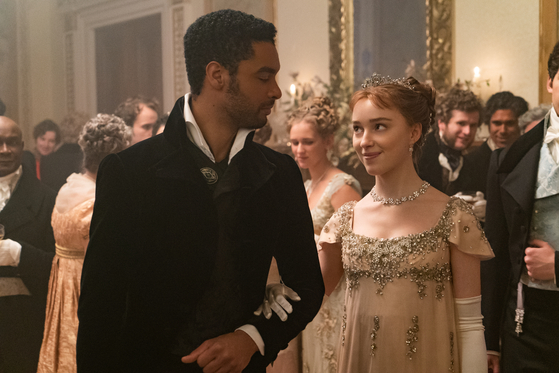 "The appeal [of historical K-dramas] is looking at the period costumes," she said. "Even though they might not be entirely historically accurate, it adds to a sense of magic. It's fun to get a fantasy-like glimpse of old Korea and imagine a romanticized past. It's similar to how people enjoy [fictional period] shows like 'Downton Abbey' [2010-2015]. Historical dramas from Britain and America also romanticize the past a lot and aren't so accurate."

"There have been authentic historical dramas that were praised as well-made and are remembered as classics," he said.

"Those shows helped viewers understand a historical era and the people who lived through it. The writers highlighted the human side of characters that are still universally relatable. To say we can't make dramas historically accurate because they'd be 'boring' is nothing more than an excuse for the producers' lack of ability or effort." 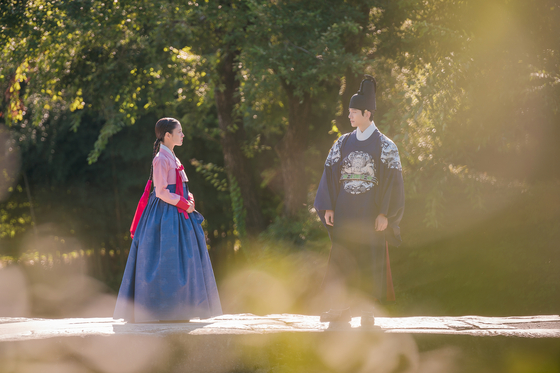 A scene from "The Red Sleeve" [MBC]


While heavy if not complete fictionalization in recent historical K-dramas raises concerns for some, it certainly seems to be attracting a wider audience, including young Koreans and, in particular, international viewers.

"To foreign viewers who are looking for something different, historical K-dramas are innately unique," said pop culture critic Jeong Deok-hyun.

"Traditional attire, rigid social hierarchy and gender roles specific to old Korean dynasties can feel novel to foreigners. Moreover, 'Squid Game' [2021] was such a hit on Netflix that it led people to watch more Korean shows on the platform, and many global viewers were already familiar with the Joseon Dynasty to some extent thanks to Netflix's zombie period drama 'Kingdom' [2019-]. So Korean historical dramas definitely have a competitive edge in the international market, which explains why 'The King's Affection' is popular worldwide. 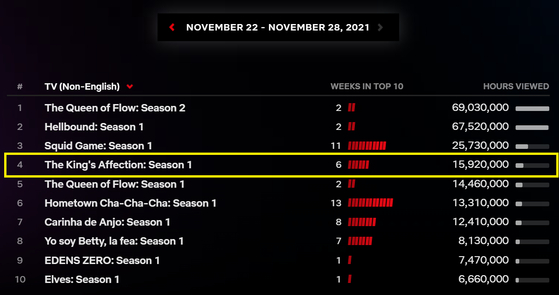 
"The thing is, most foreign viewers don't know enough to judge whether a show is historically accurate or not, so what matters most to them is how interesting the plot is. Even many domestic viewers who know Korean history share such view. The priority of a drama is to be fun to watch, not to teach history. Authentic or fictional, what's important is how effectively a historical K-drama utilizes the genre's unique aspects to tell an appealing story."

"Melodramatic themes like forbidden love have been so overused in K-dramas that viewers are sick of it," he said. "But change the backdrop to the Joseon Dynasty with rigid social classes, then forbidden love becomes more convincing and dramatic as there are higher hurdles to jump over. Hence romance is a great element for historical K-drama plots."

A scene from “The King's Affection” [KBS]


Alice Leoni and Kani Rasul, K-drama fans living in Italy and Germany respectively, said such novelty and lighthearted plots focused on romance are exactly what drew them to the historical genre.

"I was interested because of the different setting," said Leoni. "Historically speaking, Europe and Asia were quite different, and discovering new things is always interesting. But I don't really see any differences between a historical K-drama and a non-historical one, at least in terms of plot and characters [centering around romance]."

"My observation is that Korean historical dramas are incredibly cheesy, but strangely in a nice way," Rasul said. "I watch historical K-dramas precisely because they are so cheesy and unrealistic. I don't have to think hard while watching. I consider them as comfort food, although I am fully aware that they're not entirely accurate. But with the proliferation of Korean pop culture around the world in recent years, I wouldn't be surprised if the many young people who heavily idealize Korea also view historical K-dramas uncritically." 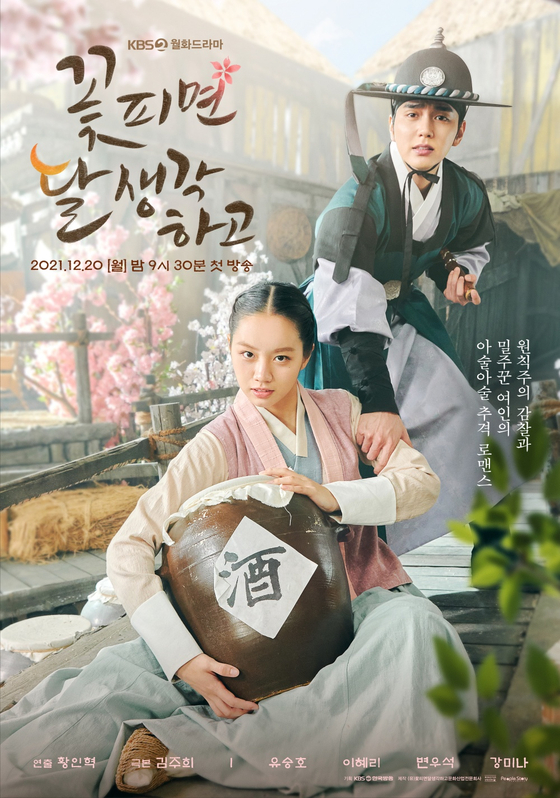 KBS’s new historical series “Moonshine” is set in a fictional version of the Joseon Dynasty and tells the story of a government inspector and a woman who makes bootleg alcohol. [KBS]


Despite ongoing concerns about misinformation and the fact that a fictional plot is unlikely to inform viewers of much real history, fans say it can still spark further interest in authentic Korean history or at least heighten general awareness.

Marcela, a Peruvian fan, said although the first historical K-drama she watched was completely fictional since it dealt with time travel, it was how she "started getting more into Korean history." As she watched more shows, she grew invested in learning about Korea's vast amount of historical records and found it "amazing how much information one can access about Korean history," especially since Peru does not have much written history from before the Spanish conquest.

"I personally don't watch historical K-dramas to actually learn about history, but for entertainment," said Jian Bos, a Dutch fan. "Still, sometimes after watching a drama that's based on real people, I look up information about them to see how accurately the drama portrayed actual facts. Even historical dramas that are not real or 100 percent accurate still give insight on how people used to live — gender roles, social classes and customs, spiritual or religious beliefs, family values — without being too serious."

A scene from “The King's Affection” [KBS]


"Although opinions among viewers and experts remain mixed, I believe variety is always necessary," critic Jeong said. "We do need more serious and authentic historical shows, but we also need shows that have more room for creative imagination within the unique time and space of the Joseon era."

KBS's new, more factual series "The King of Tears, Lee Bangwon," which first aired on Dec. 11 and centers around King Taejong (1367-1422) of Joseon, is expected to bring some balance to the historical K-drama genre.

"It's important for historical dramas to clarify their degree of fictionality, but as long as they do, we should embrace variety within the genre. Neither authentic nor fiction is the only correct answer in today's age of various content," Jeong added.