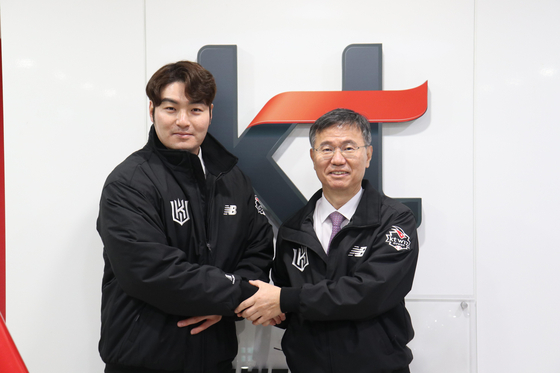 Park will earn 2 billion won in guaranteed salary with a 700-million-won signing bonus and 300 million won in incentives.

Park debuted in the KBO in 2005 playing for the LG Twins at the age of 18. In 2011, he moved to the Nexen Heroes, now called the Kiwoom Heroes, where he built a name for himself.

Park then spent two seasons abroad, hitting his first Major League home run in 2016 with the Minnesota Twins. However, after a difficult season with the Twins, Park spent the 2017 season in Triple-A.

Park returned to the Kiwoom Heroes in 2018 and played the last four seasons with the Heroes. But from next season, he will appear with defending champions KT Wiz.

The KT Wiz swept the Doosan Bears to win their first Korean Series title on Nov. 18. The KT Wiz are the youngest club in the KBO, having joined the league in 2015. This year marks the first time for the club to earn a spot in the Korean Series.