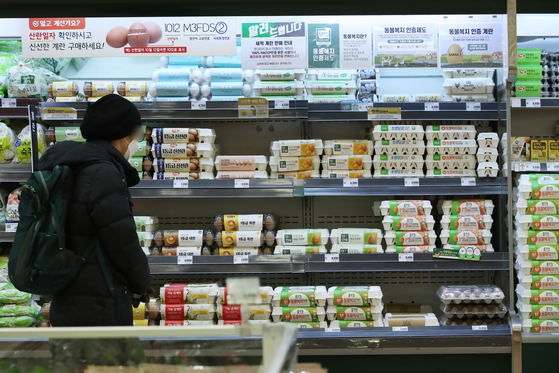 Eggs sold at a retail store in Seoul in December. Eggs were one of the food items that saw a sharp increase in 2021. Consumer price grew at the fastest rate in a decade. [YONHAP]

Consumer prices for the whole of 2021 were up 2.5 percent compared to 2020, the sharpest increase in a decade.

According to Statistics Korea on Friday, the jump of 2.5 percent was the sharpest since 4 percent was recorded in 2011.

The statistics agency cited the increase in international raw material prices, including crude prices, as the primary cause, but also attributed it to the recovery of the domestic market.

Manufactured goods rose 2.3 percent this year, the sharpest growth since 2.8 percent in 2018.

This was largely driven by the rise in international crude prices.

Gasoline prices were up 14.8 percent, diesel up 16.4 percent and LPG for vehicles up 18 percent.

Agriculture, livestock and fishery prices were 8.7 percent higher than in 2020, the sharpest increase since 9.2 percent in 2011.

Egg prices saw a particularly sharp increase of 41.3 percent, while the price of green onions was up 38.4 percent.

Pork prices were 11.1 percent higher compared to last year while Korean beef was up 8.1 percent.

Utility prices were down 2.1 percent.

Additionally, consumer prices in December grew more than 3 percent for the third consecutive month despite government efforts to curb it, including releasing its agriculture reserves.

Consumer prices in December when compared to the same month a year ago were 3.7 percent higher.

Prices were mainly driven up by agriculture, livestock and fishery, which were 7.8 percent higher than a year ago.

Egg prices were up 33.2 percent, and imported beef jumped 22.2 percent.

Petroleum prices remained high, with gasoline up 21 percent, diesel up 26.6 percent and automobile LPG up 36.5 percent.

The current inflationary pressure is expected to continue for the time being.

“Consumer prices are likely to continue to experience upward pressure in the first half due to rising international crude prices and the base effect,” said Vice Finance Minister Lee Eog-weon on Friday.

The Vice Finance Minister added that the Covid-19 variant Omicron is also increasing uncertainty on the global supply chain, which could also affect consumer prices.