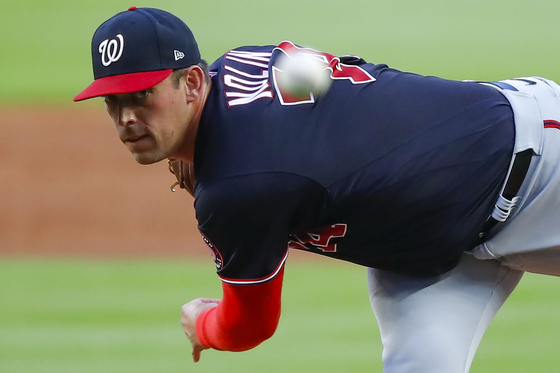 Sean Nolin pitches for the Washington Nationals in the first inning of an MLB game against the Atlanta Braves at Truist Park in Atlanta, Georgia on Sept. 8, 2021. [AFP/YONHAP]


The Kia Tigers announced Sunday that they have acquired free agent pitcher Sean Nolin on a one-year deal worth up to $900,000.

Nolin was drafted in 2010 by the Toronto Blue jays and made his big league debut with the club in 2013. He made one appearance for the Toronto club that season and one the following season, before being traded to the Oakland Athletics.

Nolin spent the following few years playing minor league baseball with a number of organizations and then spent the first half of the 2020 season with the Saitama Seibu Lions in Japan's Nippon Professional Baseball league. He returned to the United States last year and made it back into the majors with the Washington Nationals, although that stint was also interrupted by a five-game suspension in September for intentionally throwing at a batter.

With Nolin's signing, only one spot remains unfilled in the KBO's foreign player roster. With each club allowed to sign three foreigner players with a maximum two pitchers, only the Doosan Bears are yet to fill all three spots. The Bears have already re-signed league MVP starter Ariel Miranda and brought in pitcher Robert Stock, but have yet to sign a position player. The Bears are believed to still be in talks to bring back slugger Jose Fernandez.