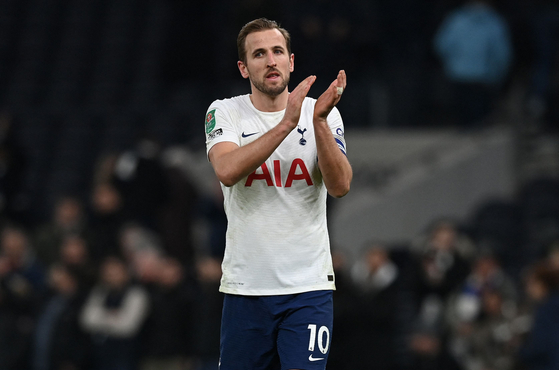 Tottenham Hotspur's Harry Kane reacts after the second leg of a Carabao Cup semifinal match against Chelsea at the Tottenham Hotspur Stadium in London on Wednesday. [AFP/YONHAP]


Tottenham Hotspur have been knocked out of the 2021-22 Carabao Cup after losing 1-0 to Chelsea in the second leg of the semifinals on Wednesday.

The 1-0 loss at Tottenham Hotspur Stadium in London puts Spurs down 3-0 on aggregate and sees Chelsea advance to the final where they will face either Liverpool or Arsenal on Feb. 27.

As well as knocking Spurs out of the competition, the Carabao Cup semifinals have also taken their toll on the Tottenham squad. A day after the first leg on Jan. 5, Korean striker Son Heung-min felt pain in his leg that has now developed into a muscle injury, taking him off the pitch for at least two weeks.

Son was substituted off in the second half of Spurs 2-0 loss to Chelsea in the first leg. He wasn't an injury concern at the time, Conte confirmed, but started to struggle the following day.

Son's departure comes as a blow to both Tottenham and Korea. Spurs performed fine without the forward in their 3-1 FA Cup win over third-tier club Morecambe on Sunday, but crashing out of the Carabao Cup in the final stages for the second year in a row comes as a major blow for a club that hasn't won a trophy since 2008. Last year, Spurs lost the Carabao Cup final to Manchester City.

Spurs now have three difficult Premier League games — against Arsenal on Jan, 16, Leicester on Jan. 19 and Chelsea on Jan. 23 — all of which will also have to be played without Son.

Son is also expected to be out of the national team for two World Cup qualifiers scheduled for the end of the month.

Korea is currently competing in Group A in the third round of Asian qualifiers for the 2022 Qatar World Cup, alongside Iran, the United Arab Emirates, Lebanon, Iraq and Syria.

Korea will face Lebanon on Jan. 27, followed by Syria on Feb. 1.