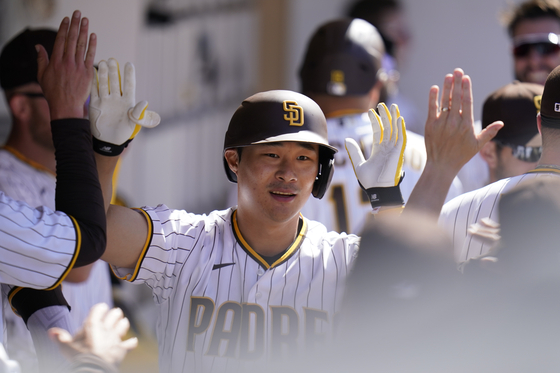 San Diego Padres' Kim Ha-seong is greeted by teammates after hitting a home run during the seventh inning of a game against the Cincinnati Reds at Petco Park in San Diego on Wednesday. [AP/YONHAP]

The Padres got off to a late start against the Reds, not getting on the board until the bottom of the fourth when Jurickson Profar hit a two-run long fly. Another run followed in the fifth, before Kim hit his solo homer at the bottom of the seventh, sending a 93.5-mile-per-hour fastball over the center field wall.

Two more runs followed in the eighth — a sac fly and a double combining to bring Jake Cronenworth and Profar home — to allow the Padres to take a decisive win and sweep the Reds for the series.

Kim has been looking stronger at the plate so far this season, picking up six hits in 10 appearances so far this season for a .214 batting average — not setting the world on fire, but potentially a sign that Kim is starting to adjust to major league pitching.

Kim returned to the Padres for a second season this year after batting .202 in 2021. Although he struggled at the plate throughout his debut season in the big leagues, Kim proved his strong defense and base-running skills.

Although April stats are rarely representative of the rest of the season, Kim's growing presence at the plate combined with his base running abilities could see him make much of an offensive impact for the Padres this year. Kim crossed the plate four times in his first two games this season, with a triple, two walks, a stolen base and a hit-by-pitch combining for some very productive at bats.

Elsewhere in the majors, veteran slugger Choi Ji-man of the Tampa Bay Rays has already gone deep twice this season, on successive nights last week, while Park Hoy-jun of the Pittsburgh Pirates is still struggling to make an impact, hitting .182 over four appearances so far.