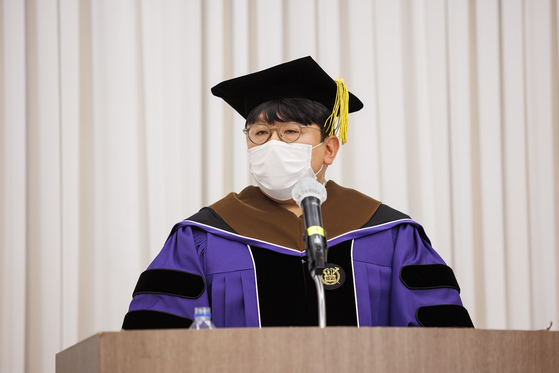 
"Father of BTS" Bang Si-hyuk, 51, was bestowed an honorary doctorate degree in business from Seoul National University (SNU) on Thursday, according to HYBE.

As the first person in the field of pop culture to receive the honor, Choi Hae-cheon, SNU's vice president for research affairs and dean of graduate school, credited him during the conferment ceremony at SNU in Gwanak District, southern Seoul, for spreading Korean culture across the globe and “exerting a good influence on all parts of the world” through cultural activities, moving “beyond race and generation.”

Bang responded, "HYBE will continue to think about the convergence of technology and culture to shape the future of the music industry. As a businessman and an entrepreneur, I will always stick to the fundamentals of what a company should be about and work with a sense of responsibility."

Bang is a lyricist, composer and producer who founded HYBE in 2005. He currently sits as the chairman and board of directors of the entertainment company. It created the global phenomenon BTS in 2013.

Bang received a bachelor's degree in aesthetics from SNU in 1997.