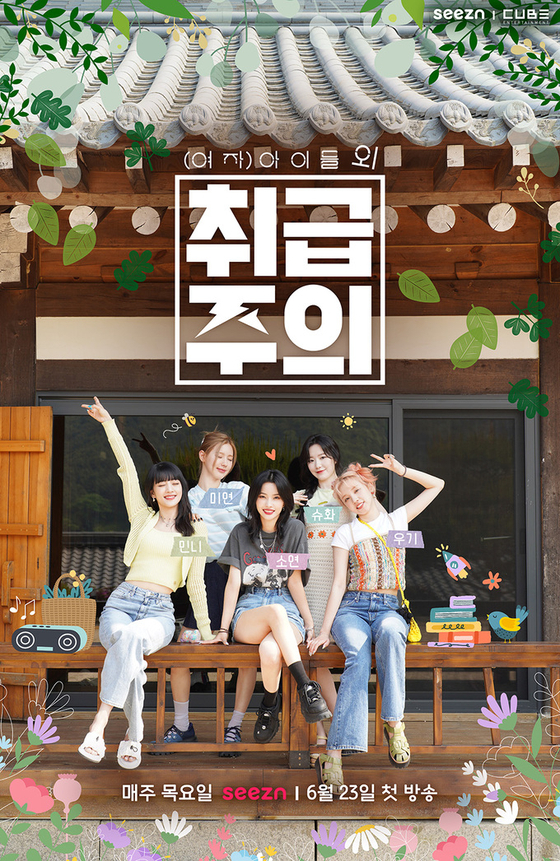 A travel-themed reality program featuring girl group (G)I-DLE will be released next week, according to video streaming platform Seezn on Tuesday.

Available from June 23, the program is titled "Handle with Care" (translated). On a two-day trip to a location outside of Seoul, the members of (G)I-DLE will cook, eat, enjoy adventure sports, play games and relax.

The show is a Seezn original series and will only be available through the platform. Seezn is only available in Korea.

Ahead of the program's release, (G)I-DLE will embark on its first world tour. Titled “Just Me ()I-DLE,” the tour will start in Seoul on June 18 and make stops in 16 cities.

The group will then move on to Los Angeles, San Francisco, Seattle, Dallas, Houston, Chicago, New York and Atlanta in the United States, Santiago in Chile, Mexico City and Monterrey in Mexico, Jakarta and Manila in the Philippines, Tokyo and Singapore.

The group’s first full-length album “I Never Die,” which dropped in March, topped the iTunes Top Albums chart in 24 regions and the K-pop Top Albums chart in 11 countries. Its lead track “Tomboy” placed at No. 34 on the Billboard Global Excl. U.S. chart.