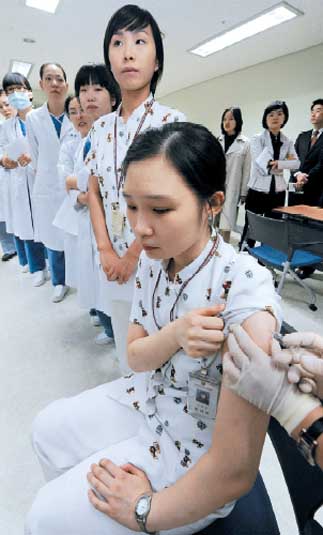 Eight people have died of A(H1N1) flu in the first two days of this week, spreading fear that the disease may be spreading rapidly here. Hospitals specially designated by the Health Ministry to treat the disease are crowded with patients and they say their capacities may soon stretch to the breaking point.

The Health Ministry reported yesterday another three deaths from the latest strain of the virus, including one 26-year-old female. She became the first person in her 20s to die of the new flu. Since she had been suffering from a pre-existing nervous system disease, whether or not to classify her as an already “high-risk” patient has not yet been decided.

According to the Korea Centers for Disease Control and Prevention, the new virus was discovered in her cerebrospinal fluid, instead of respiratory organs, as it is in most cases. The center said it is now conducting close epidemiological research into her case. Others who died Tuesday were a 76-year-old woman and an 84-year-old man.

From Aug. 15, the day that the first domestic case of the new flu infection was confirmed, until yesterday, the death toll has reached 28. Some 24 were in the high-risk category. The daily average of confirmed cases surpassed 4,000 last week and the health authorities estimate the figure has grown this week. Over the past week, multiple infections broke out at 870 schools nationwide.

“Between 20 and 50 percent of H1N1 deaths overseas were people who were normally healthy, although there are some fluctuations among countries,” said Kwon Joon-wook, an official with the disease control center. “Given that even those in the non-high-risk category are exposed to the risk of catching the flu with the rapid spread of the disease, it is recommended that anyone showing symptoms should visit a hospital, get diagnosed and take antiviral medication.”

Three different ministries - public administration, health and education - as well as the Prime Minister’s Office, released a joint statement to assuage growing concerns over the flu.

“Despite its fast spread, its death rate is almost equal to or lower than that of seasonal flu,” the statement said. “The government is doing whatever it takes to cope better with the current situation as one of its main obligations is to protect the health and lives of our people.”

Meanwhile, government-designated hospitals are saying that they won’t be able to care for all of the ever-increasing patients. Cho Woo-hyun, head of Gangnam Severance Hospital, said, “Nine pediatricians divided into three groups have been treating patients during the morning, afternoon and night since early last week, but they won’t be able to handle it if patients continue flooding in like this.” Seoul National University’s medical center reported operating 12 beds but they are already full. Government-designated hospitals refer to 472 with internal medicine and pediatrics departments as well as with artificial respirators. The combined number of beds at the hospitals total around 9,000.

At such hospitals, patients can immediately buy Tamiflu, an antiviral medication for the A(H1N1) flu, after receiving a doctor’s prescription. Other patients should visit pharmacies to purchase the drug. Only pharmacies receiving government approval can sell the drug.

Beginning Oct. 30, the Health Ministry will allow all pharmacies nationwide to sell the drug, though related government officials say it “won’t be that easy.” Currently, local public health centers are responsible for supplying Tamiflu to neighboring pharmacies, but since those centers are already overloaded, the supply procedure won’t be smooth.

Hospitals designated for flu treatment also point out that the majority of patients visiting them show minor symptoms. According to Seoul National University’s medical center, none out of the 150 who visited the hospital in central Seoul on Monday were hospitalized. Those patients say they chose the general hospital instead of smaller private hospitals near their residence because only those government-designated hospitals issue medical certifications officially recognized by schools or workplaces.

Health experts say that the most pressing issue for now is reducing the number of serious patients and deaths and that the best preventive measure is having patients take Tamiflu as soon as possible.

Meanwhile, Lee Jong-ku, head of the disease control center, said on a radio show yesterday that the country has already passed the point where it would consider shutting down the entire school system nationwide temporarily to prevent spread of the disease.