One snow blast gone, another is on its way today

One snow blast gone, another is on its way today 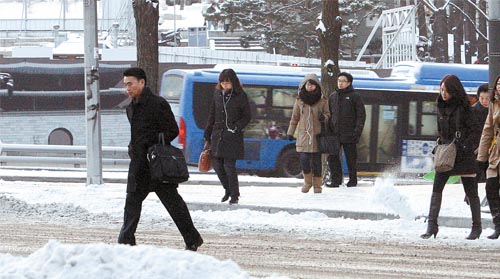 Pedestrians head to work on the snow and slush-covered roads yesterday morning at Namdaemunno in Jung District, central Seoul. By Kim Seong-ryong

The current cold spell will continue to grip the nation this week, while Seoul and other metropolitan areas are expected to receive at least three to eight centimeters (1.18 to 3.15 inches) of snow today and tomorrow morning, the national weather agency said yesterday.

The new powder comes in addition to Sunday’s snowfall that sent cars sliding and pedestrians slipping throughout the day. According to the agency, the snow will begin this morning in the Gyeonggi areas on the western coast.

Northern areas of North Gyeongsang will see snow in the evening, the agency added. Other areas - South Chungcheong and the Jeolla provinces - will see snow tomorrow. The agency said the Seoul and Gangwon areas will remain stuck with subzero temperatures in the daytime. The temperature isn’t expected to break the freezing mark until Jan. 4.

Sunday’s drifting snow plagued much of the Seoul area, leaving drivers stranded and making walking hazardous. Some bus drivers had no other option but to let out passengers in the middle of the road when they insisted on catching a subway ride. Some drivers had to push their cars out of snowy ruts.

At 11 a.m. Sunday, the Korea Meteorological Administration had forecast some of Seoul and Gyeonggi areas would see sporadic snow late Sunday afternoon or evening, but the snow started to fall around 1 p.m. The weather agency predicted Seoul would receive one centimeter of snow, but 2.6 centimeters had fallen by 10 p.m. Sunday.

The Seoul city government poured 7,000 tons of salt and calcium chloride on the snow-covered roads on Sunday - the highest amount used on a single day in the city. As of 2 p.m. yesterday, the city government said 9,273 workers, more than an 11-fold increase from the 800 workers dispatched to the sites on Sunday afternoon, were dispatched to melt and wash away snow.

“Normally 1,800 bags of salt and calcium chloride are enough for snowplowing for one day,” said Song Yeong-bae, an official at Seoul city government. “When we’re out of stock due to frequent snowfall, [the city government] will purchase extra bags of materials in January.”