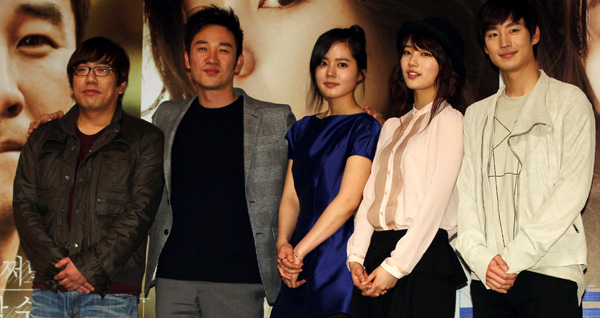 In promoting the romantic film “Introduction to Architecture,” its stars open up about their first loves for fans at a press conference on March 13.

Actress Han Ga-in said that the theme song of the film reminded her of her first romance, saying she was able to draw inspiration from those feelings.

“What I remember most distinctly about my first love are the walks we used to take and the music we used to listen to together,” she said.

The 30-year-old actress said that she felt nostalgic while watching the finished film “due to aging, I suppose.”

Meanwhile, her co-star Uhm Tae-woong said that he only wanted to say thank you to his first love for affording him the experience, adding “I hope that you are happy wherever you are.”

Suzy from Miss A didn’t play along, though, and said that she was still waiting for her first love, a quip that drew laughs from audience members.

“Introduction to Architecture” tells the story of two university students who meet in an introductory architecture class and fall in love. The story unfolds in the future when the two are reunited after the female student tracks down her first love to seek his help in building her house. It will open on March 22.