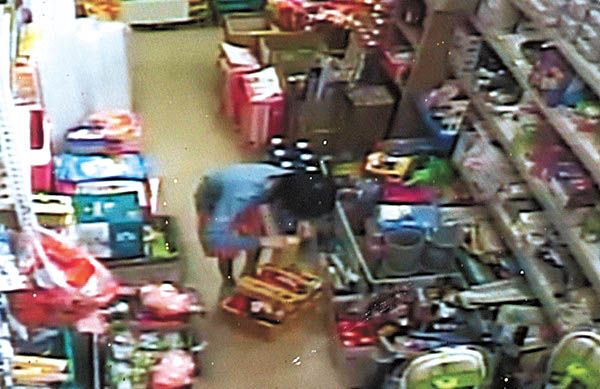 An 11-year-old girl held captive in a house in Incheon and starved for two years suffered more than physical harm.

Her very soul was damaged, says a psychiatrist who examined paintings drawn by the malnourished and battered girl.

Shin Yee-jin, a child psychiatric expert and an incumbent Saenuri lawmaker, asked the girl, who escaped down a gas pipe on Dec. 12 and was caught stealing bread in a local store, to draw paintings as part of a psychological test at Nasaret International Hospital in Incheon, where the girl is hospitalized.

The girl used a two (0.79 inches) by three centimeter space on an A4 sheet to draw a Christmas tree and a house. 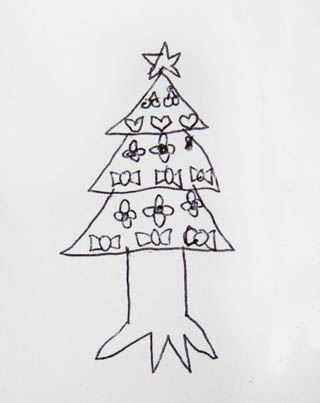 A drawing by a girl who fled from two years in captivity by a game-addicted father show that she is suffering from lack of affection, a sense of isolation and a destroyed concept of family. [LIM HYUN-DONG]

Children her age usually use more than half the paper for such a drawing. The battered girl’s drawing of a Christmas tree was thumb-sized, although it was decorated with flowers, heart shapes, and ribbons and a shining star on top. The tree has four roots.

“The significance of various decorations is that she is expressing emptiness and lack of affection,” said Shin, a trained psychiatrist. “The exaggerated roots show that she still has hope to find rest and shed her pain and anxiety.”

The girl told police she was not allowed to leave the house by her Internet-game-addict father and two women living in the house and was beaten and starved. She was 120 centimeters (3.9 feet) tall, the standard height of a 7-year-old, and weighed 16 kilograms (35.3 pounds), average for a 4-year-old, and was bruised and diagnosed with fractured ribs.

“Drawing a painting in the corner of a piece of paper shows that her oppressed mind and limited emotions are locked into a small space due to the consistent abuse,” said Shin, who also consulted in a notorious 2008 case in which an eight-year-old girl was kidnapped and raped by a 57-year-old. She was named a proportional representative to the National Assembly representing children’s welfare in 2012.

The 11-year-old girl also drew a two-story house with four windows and a door. The girl told Shin she is living with three kitty cats but no other family or friends.

The concept of love from family may not be known to the girl, Shin said.

But her desire to live with pets can be read as a signal that she wants to overcome loneliness.

“I am always alone. I can eat and I can do everything by myself,” she said repeatedly, according to Shin. “I’m not worried.” Shin said this was an instinctive response when someone is absorbed in an inner world built by oneself.

The two things she wants the most are pizza and a doll, she told the lawmaker and a JoongAng Ilbo reporter two days ahead of Christmas Eve. She also said her career ambition is to be a cook.

On Wednesday, the Ministry of Health and Welfare and the Ministry of Education said they will carry out a joint investigation on long-term absence of students in elementary schools to see if there’s a way to identify more cases like the one in Incheon. They will try to track down every student who has not attended school for a long period.

Incheon Yeonsu Police Precinct first reported the case over the weekend and said the girl escaped from the second floor of her house on Dec. 12.

Days later, the girl’s 32-year-old father, his girlfriend and another female friend were arrested. Police found a well-fed and well-groomed Maltese dog in the house.

The police are planning to send the case to the prosecutors no later than today, charging the three for habitual violence, confinement, abuse and neglect of a child’s education.

“The girl told the police she doesn’t want to go back home. She said ‘yes’ clearly when asked if she wants her father to be punished,” Jang Hwa-jeong, a director at the National Child Protection Agency, a government organization to prevent child abuse, said at a briefing on Tuesday.

Jang said the girl will leave the hospital at the end of this month and receive psychiatric treatment.

The girl’s wish to be separated from her father will come true. She will meet a new foster family selected by the government next year.