Busy Ha Jung-woo isn’t ready to take a break: The ‘Along with the Gods’ star sees a lot of himself in his character

Busy Ha Jung-woo isn’t ready to take a break: The ‘Along with the Gods’ star sees a lot of himself in his character 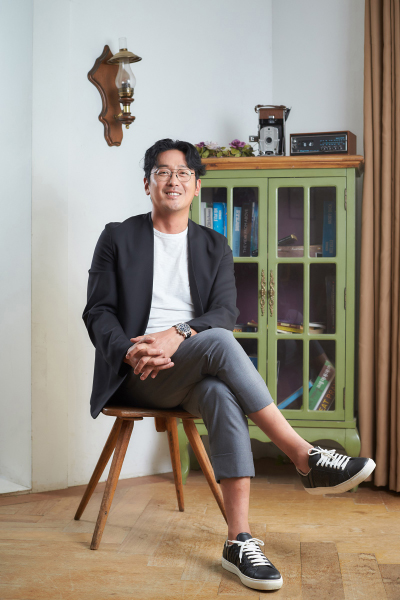 When the fantasy blockbuster “Along With the Gods: The Two Worlds” hit theaters in December, there wasn’t much Ha Jung-woo could say about his grim reaper character Kangrim in the media, despite the fact that the film went on to sell more than 14 million tickets.

Since the mega-budget movie is a two-part series, the film and its sequel - which each cost 20 billion won ($18 million) to make - were shot simultaneously. When Ha, his co-stars and director Kim Yong-hwa were promoting the first installment, they had to calculate every word they said, so as not to give away any part of the sequel.

But now that “Along With the Gods: The Last 49 Days” is finally out, there is a lot more that the actor can share about the movie and his character.

Last year’s release told the story of three grim reapers - Kangrim (Ha), Haewonmak (Ju Ji-hoon) and Deokchoon (Kim Hyang-gi) - who guide a brave firefighter named Ja-hong (Cha Tae-hyun) through seven hells, where he is judged for his moral deeds during his life. While many described the film as a tear-jerker, the sequel, also adapted from Joo Ho-min’s sensational webtoon of the same title, takes a different turn.

“The first movie was a tear-jerker while the second film is an epic,” said Ha during an interview held in central Seoul last week. “It would have been boring if the second movie also tried to draw tears.”

The sequel highlights the relationship the three grim keepers had a thousand years ago, when they were alive. A new addition to the sequel is Ma Dong-seok, who made a brief appearance at the end of the first film. Ma plays the tender-hearted god with tremendous physical strength that allows him to knock down grim reapers in a single swing, although he is unable to lay a finger on humans.

More openly talking about his role and the elements that made him take the part, Ha wasn’t hesitant to express his excitement for the movie’s release.

Actor Ha Jung-woo, second from right, returns in the sequel to “Along With the Gods,” in which he plays a taciturn grim keeper. [LOTTE ENTERTAINMENT]

“I still remember the shock I felt after receiving the script of ‘Along With the Gods’ because I wasn’t sure whether it’d be possible to make such a large scale fantasy film in Korea that involved something like flying around,” said Ha. “The character was difficult to interpret because Kangrim seemed to be someone that manages to leave a strong impact without doing much.”

But still, Ha thought Kangrim was the character he would be able to pull off the best.

“I could sympathize the most with Kangrim. He doesn’t talk much. As I get older and experience more, I’ve learned to spend more time listening and helping others out instead of trying to be heard or ask for help. Sometimes I pretend not to know about something, which is something I saw in Kangrim.”

Though Ha is confident that the sequel will do well at the box office, based on the overall response after its premiere, Ha still can’t be assured.

“I’m very grateful about the affection that the first film received, but this doesn’t necessarily guarantee the success of the sequel, since they take a very different approach,” said Ha.

The actor hopes the series sets a path for more fantasy films to be made in Korea.

“I’m especially happy about the fact that a fantasy movie was widely loved. I think [local] audiences have grown to become much more accepting of diverse genres, allowing cineastes to make bolder choices.”

Ha, known for his roles in highly praised films “The Handmaiden” (2016) and “The Berlin File” (2013), is also equally passionate about directing films. Having directed two comedies, “Fasten your Seatbelt” (2013) and “Chronical of a Blood Merchant” (2015), Ha is currently working on his third film, which will be a caper comedy movie involving journalists trying to crack a case.

The movie will begin filming late next year at the earliest due to the actor’s tight schedule. He will be shooting three movies in the meantime, the tentatively titled “Closet,” “Boston 1947” and “Mt. Baekdu.” Ha will also star in the upcoming “Take Point,” which is scheduled to be released later this year.

When asked how he keeps up with such tight schedule, considering that he also holds exhibitions from time to time as a painter, the prolific actor said, “I choose to do things even after knowing that it will be a great challenge for me, because I can’t stand feeling bored. I care more about the excitement and the curiosity than the hardship that will entail.”

“Along With the Gods: The Last 49 Days” opened on Thursday, claiming 70 percent of online ticket reservations at 4:40 p.m. on Wednesday, according to data provided by the Korean Film Council. The film’s actual ticket sales were not available at press time.