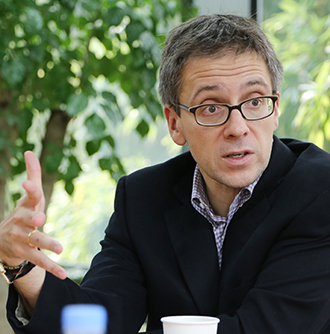 Ian Bremmer President and founder of the Eurasia Group

American political analyst and best-selling author Ian Bremmer says the United States should “try to facilitate a dialogue” between Japan and Korea amid continued tensions between the two neighbors to follow President Barack Obama’s Seoul and Tokyo visits in April.

“The concern that I have is not that [Prime Minister Shinzo] Abe wants to create a real normal foreign policy for Japan - over the long term, Japan needs to do that,” said Bremmer, the president and founder of the Eurasia Group, a leading global political-risk research consulting firm with offices in New York, Washington and London. “The problem I have is that he’s combining that with this holding onto the Japanese view of history, which is much more likely to cause proactive conflict that is unnecessary with the Chinese and the South Koreans. And not just Abe, but some of his advisers, as well, have made very intemperate statements on this front … which I think is dangerous and unnecessary.”

Bremmer said he has a close relationship with Abe, whom he first met during the Japanese statesman’s first term as prime minister seven years ago, and he recently had a four-hour dinner with him in New York. The two also met in January at the Davos World Economic Forum, which was also attended by President Park Geun-hye.

As he sat down for an interview with the Korea JoongAng Daily and the JoongAng Ilbo on March 4 at the Asan Institute for Policy Studies in Jongno District, central Seoul, Bremmer said that the United States often speaks of “a pivot to Asia,” but in reality must put a stronger emphasis on China - which he considers the biggest single political issue as the Asian nation heads toward becoming the world’s largest economy. He also claimed the U.S. policy making team was “weaker” across the board in President Obama’s second term than in his first.

Last week, Bremmer participated in the Asian Leadership Conference in Seoul and gave a lecture on geopolitics and the market at the Asan Institute on Foreign Policy.

He is an author of several national best-sellers, including “Every Nation for Itself: Winners and Losers in a G-Zero World,” published in Korea last month, in which he argues that there is an emerging global leadership vacuum. He urges nations to go back to the Group of Seven and to gravitate toward “groups that are like-minded and coalitions of the willing.”

A. We put North Korea at the end of that report as a question mark because it is clear that the risk around North Korea is going up, the potential for implosion is going up, but given that we know nothing about what’s going on inside North Korean society, it’s impossible to predict. So what the South Koreans need to do is prepare themselves, make themselves maximally resilient - not just South Korea domestically, but also the ability of the South Koreans to work with other countries in the region who have conflicting interests on North Korea should it fall apart.

There’s some concern abroad that Abe shouldn’t use provocative foreign policy against its neighbors, including China and that Korea is concerned with Prime Minister Abe’s nationalist moves, like his visit to the Yasukuni Shrine in December.

I think that it was a mistake for Abe to visit the shrine. I also think it’s a mistake for Abe’s advisers to talk about history. But I completely understand why Abe wants to change the Constitution and why he wants to develop a real military .?.?. No. 1, China is in a very different position today than it was. And No. 2, it is not clear that the U.S. is going be committed to Japan as it has been historically. And if you are Japan, you’ve got to worry about that. The U.S.-China-Japan relationship is very analogous to the U.S-Israel-Iran relationship. Israel is America’s best friend in the Middle East, but the Americans presume the Israelis will do what we want, and we [are trying] to get a deal with the Iranians that the Israelis don’t want. If you are Israel in this situation, you start yelling a lot louder. You start squeaking, because you are worried that the Americans will sell you out. This is the Japanese position on U.S-China relations right now. They are very concerned that China is trying to drive a wedge between the U.S. and Japan and are having some success, and the Japanese don’t want that. In that regard, Abe is making it much clearer that he will be assertive as a Japanese leader. I think his visit to the Yasukuni Shrine is a part of that. It unfortunately causes risk itself, not just with the Chinese but the South Koreans, which is a relationship we really need to fix.

What do you think is Washington’s role in the Japan-U.S. relations?

[President Barack] Obama, as you know, in April is coming to Seoul and Tokyo, and I think President Park should ask Obama to invite both heads of states to the White House to try to facilitate this relationship between the two allies .?.?. South Korea and Japan both have good relations with the U.S. So this is an area that I think the U.S. should play much more significant role. .?.?.?I’m not saying that they will, but that’s what they should do.

You have said before that North Korea will implode. Has North Korean position on the J-curve - the political graph on country’s openness and its stability - shifted in the past eight years? What are the risks of North Korea imploding? [Bremmer’s book, “The J Curve: A New Way to Understand Why Nations Rise and Fall,” which was named Book of the Year by the Economist in 2006, placed North Korea on the far left of the J-Curve among stable and closed regimes.]

Many countries have changed, but not North Korea. Many countries have fallen off the left of the J-Curve since I wrote the book in 2006, but North Korea remains the world’s only remaining totalitarian state. .?.?.?Now remember, that far left side of the J-Curve is very steep, and when you start to fall down the J-Curve, you fall very quickly. So you have to worry. That’s why I think it’s very important for the South Korean people to talk about reunification. Not because the North Koreans are ready for it - they’re not - but because it might be forced upon them. And it’s a huge opportunity for South Korea. I agree with [American businessman and author] Jim Rogers on that. But he acted as if there was no danger. I think it’s irresponsible to tell the South Korean people that everything is going to be wonderful, that all you need to do is open the border. You open the border and they might attack you. .?.?.?I agree completely with Jim that the extraordinary ability of a combined Korean nation to invest and grow and be educated, and make just make a huge difference in the most dynamic part of the world economically - how exciting. But it’s also something that can blow up in your face .?.?. because North Korea could implode quickly and because the countries in the region hate each other. That trust doesn’t exist.

Many worry about the strained bilateral relations between China and Japan, especially in light of their enormous trade volume.

And she immediately told me, “Well, actually this year, South Korea will become China’s most important trade partner.”

Well, isn’t that a problem? I said.

And she said, “It is a problem, for Japan, not a problem for China.”

I don’t agree with that. I think it’s a problem for China and Japan. The Chinese are getting a little bit arrogant about Japan. They have written Abe off as an interlocutor. .?.?.?It’s incredibly unfortunate that the Chinese and the Japanese have no wiliness to engage with each other at the high levels.