This undated file photo of Manwoldae in what is now Kaesong, North Korea, shows the building foundations that remain to attest the former glory of the royal palace complex from the Goryeo Dynasty (918-1392). [JOONGANG ILBO]

Relations between Seoul and Pyongyang have been rocky for the past several years.

This has taken a direct toll on the joint archaeological exploration at Manwoldae, a vast 10th-century royal palace complex, in what is today Kaesong, North Korea.

The excavation began in 2007 and went on until 2011 before work stopped.

Only last July were South Korean archeologists able to travel to Kaesong, which was the capital of the ancient Goryeo Dynasty (918-1392), to resume the dig, which went on for 180 days and was in fact the longest period of excavation at Manwoldae. 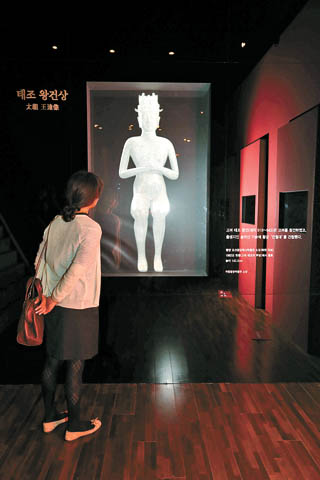 Since the artifacts could not travel from Kaesong to Seoul, the exhibition in Seoul resorted to digital technologies like 3-D holograms. [SIN IN-SEOP]

There has never yet been an exhibition of the findings from the joint effort at Manwoldae in either South or North Korea - until now.

The Cultural Heritage Administration announced Oct. 8 that the governments of Seoul and Pyongyang will be holding the first exhibition from the inter-Korean archaeological exploration at the Manwoldae complex.

The exhibition will be held in Seoul, at the National Palace Museum, from Oct. 14 to Nov. 6. It will also take place in Kaesong, at the Goryeo Museum there, from Oct. 15 to Nov. 15.

In actuality, none of the artifacts uncovered by the joint excavation at Manwoldae were able to travel to Seoul for the exhibition. However, exhibition organizers are hoping to make up for it using digital technology, allowing visitors to feel closer to Kaesong.

“The exhibition in Seoul will feature three-dimensional holograms of about 50 relics found by the joint excavation at Manwoldae, while the exhibition in Kaesong will display about 100 relics, like pottery, roof tiles and figurines,” Mun Seon-gyeong from the Cultural Heritage Administration’s international cooperation division said.

The exhibition in Seoul is also showcasing relics found at the site by the Japanese during the colonial era (1910-45) and kept at the National Museum of Korea in Yongsan District, central Seoul.

Manwoldae is known for its unique architectural and engineering achievements, which show a respect for the natural landscape. It is part of the Kaesong Historical District, a large area encompassing all of the city's historical sites, including the tombs of the Goryeo kings and Sungkyunkwan, a former Confucian educational institute, among other sites.

Seogeung, an envoy from China's Song Dynasty (960-1279), detailed his awe on beholding the palace in his book “Goryeo Pictures and Texts,” written after his visit to Kaesong in 1123. "The ridges of the roofs are connected as if flying through the air and decorated with dancheong [traditional multicolored paint applied to wooden buildings] of red and blue."

In 1361, the palace was burned down by the Red Turban Army, the soldiers of China's Yuan Dynasty, and today only stone foundations remain to indicate the former glory of the Goryeo palace. Since 2007, South and North Korean archaeologists excavated more than 10,000 artifacts from the site, including various roof tiles and blue celadon pieces.