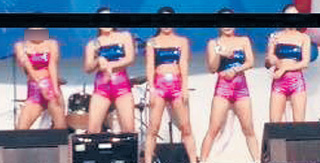 Hallym University Medical Center is under investigation by the Ministry of Employment and Labor for allegedly demanding that its nurses wear explicit clothing and dance promiscuously at its annual talent show on Sept. 24 in Chuncheon, Gangwon.

A video of the nurses dancing seductively to K-pop in pink shorts and cropped tube tops went viral on YouTube, Naver TV and other platforms four days ago. Some nurses said they were pressured to wear the clothing and dance that way.

“I couldn’t say no because it is expected and a given that newly hired nurses participate in the event and don’t complain about the dress code,” said one nurse on a Facebook group page for Koreans in the nursing field.

Another nurse who took part in the event wrote, “After four years of studying and 1,000 hours of clinical training, I was so embarrassed of myself during the event.”

The Korean Nurses Association released a statement Monday, stating that the hospital abused the civil rights of the nurses. It demanded that the government carry out a thorough investigation.

“The government must develop policies to ensure that problems like this never happen again,” the association stated. The nurses involved were all women, raising questions of gender inequality.

A spokesperson from the ministry explained Monday that, “if it is confirmed that the nurses voluntarily wore explicit clothing and danced, then we cannot take legal action, but if they were forced to do so, then it could be a violation of the Act on Equal Employment and Support for Work-Family Reconciliation,” which guarantees equal opportunities and treatment for men and women at work.

The incident was initially exposed in a KakaoTalk open chat room hosted by the civic organization Gabjil 119 since Nov. 1, when a nurse expressed her discomfort with having to wear explicit clothing for the event. More than 100 nurses from the institute joined the chat room to write their complaints and receive legal advice from the organization’s lawyers and labor union experts.

Many employees suggest taking stronger measures by creating their own labor union to fight the institute.

Hallym University Medical Center released a statement Tuesday in which it said, “[the public] interpreted the outfits as sexually explicit,” and that it will “take responsibility for the widespread public concern the incident caused.”

A spokesperson from the hospital added that the institute is planning on reforming the dress code for the event, and is even taking into consideration complaints to get rid of the talent show entirely.

The Korean Nurses Association, in the meantime, is planning to open a civil rights center for its members by next year.