Panelists discuss Korea’s ongoing fight against corruption and its obstacles at the 2019 Anti-Corruption Forum on Thursday. From left to right: moderator Park Suk-bum, secretary general of the Global Compact Network Korea; You Han-beom, the executive director of Transparency International Korea; James Kim, chairman of the American Chamber of Commerce in Korea; and Chung Kyo-hwa, vice chair of the Compliance Committee of the Korea In-house Counsel Association. [PARK SANG-MOON]

Milestones in Korea’s fight against corruption and the challenges that lie ahead were discussed by panelists at the 2019 Anti-Corruption Forum on Thursday.

Following a keynote address by Anti-Corruption and Civil Rights Commission of Korea Chairperson Pak Un Jong, a panel discussion was held between You Han-beom, the executive director of Transparency International Korea; Chung Kyo-hwa, vice chair of the Compliance Committee of the Korea In-house Counsel Association, and James Kim, chairman of the American Chamber of Commerce in Korea. The talks were moderated by Park Suk-bum, secretary general of the Global Compact Network Korea.

Park opened the discussions by noting the significant progress so far on steering Korean society away from corruption, particularly with the implementation of the Improper Solicitation and Graft Act in 2016. While in its initial stages the law invited significant resistance, Park noted that it now has wide support from the public.

You said that Korea has advanced in recent years in fighting corruption, earning a score of 57 out of 100 in Transparency International’s (TI) 2018 Corruption Perceptions Index. Korea ranked 45th among 180 countries on this list, a step up from 51st place in 2017. 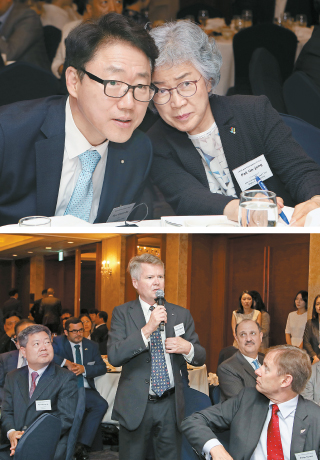 Above: Pak Un Jong, chairperson of Anti-Corruption and Civil Rights Commission, right, and Ryu Kwon-ha, CEO of the Korea JoongAng Daily, exchange ideas during the 2019 Anti-Corruption Forum at Lotte Hotel Seoul in central Seoul on Thursday. Below: Anthony Spaeth, chief editor of the Korea JoongAng Daily, asks a question during the forum. [PARK SANG-MOON]

You attributed this improvement to the Moon Jae-in administration’s efforts to combat corruption as part of its pledge to “purge deeply-rooted evils” in Korean society.

Yet given that Korea ranked higher, at 39th, in 2009, You suggested Korea has lagged behind while other countries have made strides toward fighting graft. To meet the government’s own objectives to enter the top 20 ranking countries on the CPI by 2022, there is still much room for improvement, he added.

The disparity between perceived graft in Korea and indicators showing a relatively low incidence of bribery among individual citizens may be due to the unique nature of “elite cartels” in Korea, You said. He added that this was shown most directly in the government scandal surrounding Choi Soon-sil, a confidante of former President Park Geun-hye whose corrupt ties to the former administration led to Park’s impeachment and ouster in 2017.

The second panelist, James Kim, who served as CEO of GM, Microsoft and Yahoo’s Korean branches, said he gained experience first-hand on how societal efforts to fight corruption were playing out among larger businesses in Korea.

Kim also pointed to Korea’s laws related to corporate governance as another source of anticorruption enforcement. Compared to places like the United States, Korean CEOs are forced to take greater legal responsibility for their company’s actions, which he said generated greater accountability from business leaders.

Kim added, however, that younger and faster-growing companies, like small and medium-sized firms, by contrast lagged behind in compliance to anticorruption standards. Further education and guidance was needed to raise smaller businesses to the standard, he added.

Chung, who is also a leading attorney at Microsoft Korea, said that Korea had no shortage of legal measures against bribery, and that the 2016 antigraft act played a significant role in building a business environment that enhanced corporate liability.

The fact that the new law expanded the scope of public officials to cover journalists helped expand media coverage and raise awareness on the issue, while extending penalization for bribery to corporations instead of just individuals helped strengthen compliance, she said.

Chung brought up three suggestions that she said in her personal view could boost compliance with anticorruption standards. First, Korea should amend its criminal code so that corporate criminal liabilities should be introduced for economic crime. The fine imposed on companies that violate the rules should also be raised, she said, so that it can act as a deterrent for such behavior. Finally, she added that a distinction must be made between companies that strive to be compliant and those who do not take compliance seriously and implicitly encourage employees to ignore the law.

“Going forward, I think regulators and companies alike should be more strategic in changing the culture of companies internally,” she said. “The most aspect is the tone from the top - if it says you must be compliant, that sends a strong message.”

Chung further stressed the importance of building a culture against corruption in Korea, in addition to legal deterrents, that could build incentives for individuals to play by the rules.

“We really need to think why corruption is so bad and how it hurts our society, our values and our system,” she said. “If the culture isn’t there and we just have imposition of laws, then there will be just negative feedback.”