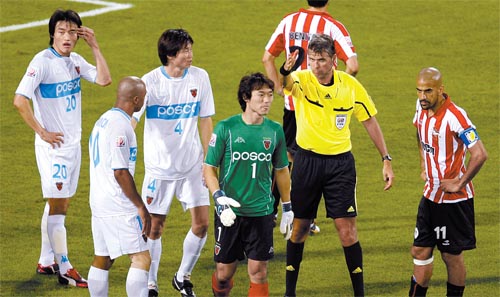 Pohang’s Brazilian forward Denilson did just about everything in the FIFA Club World Cup semifinals against Estudiantes of Argentina. He made passes, threatened the opposing defenders with nifty moves, scored a goal in the 71st minute of the match and even played keeper. But that was not enough as the Pohang Steelers lost to Estudiantes early yesterday at Mohammad Bin Zayed Stadium in Abu Dhabi, United Arab Emirates.

Denilson’s 71st-minute goal came as Pohang was down by 2. Pohang had been without their captain, Hwang Jae-won, who was sent off after collecting his second yellow of the match for his foul on Maxi Nunez. It was Denilson’s third goal of the tourney, but Pohang’s woes continued soon after.

In a game marred by questionable calls, three Steelers were sent off the pitch. Kim Jae-sung collected his second yellow of the match in the 72nd minute for his foul on Juan Sebastian Veron. Goalkeeper Shin Hwa-yong was given a red card in the 77th minute for a foul on Nunez outside the penalty box. Pohang had already used up all three of its substitutions. At this point, Denilson donned the goalkeeper’s gloves and manned the net for the remainder of the match, filling in admirably for 16 minutes.

“Denilson occasionally played the net during training. I heard he played goalkeeper until the age of 14. I was feeling bad after being sent off but was thankful that Denilson filled in well for us,” Shin said in an interview with the JoongAng Ilbo.

Although Pohang looked overmatched early in the game, it held off Estudiantes’ attacks spearheaded by Argentine national and center-midfielder Veron. As time wore on toward the late stages of the first half, the momentum seemed to be slowly shifting in Pohang’s favor.

However, Leandro Benitez scored off a curling free kick in the added time of the first half. Mauro Boselli looked to be offside on the play from certain angles but the goal was allowed.

In the 52nd minute, Veron provided a sharp pass to Boselli and Pohang goalkeeper Shin came out of the net to challenge the forward. But Boselli managed to cross the ball to the opposite side of the field and Benitez tapped in his second goal of the match. While Denilson managed to score a goal in the 71st minute on what also seemed like an offside goal, Pohang’s woes began soon after with dodgy calls from Italian referee Roberto Rosetti.

“Trust is an integral part of competition. However, I could not understand the logic behind today’s officiating. While the referee gave our team many warnings, he held back when our opponents committed rough fouls. The result doesn’t reflect what we saw on the field and was made worse by the failure by the referee,” said Pohang manager Sergio Farias in a post-game interview. He went on to criticize the format of the tourney which favored European and South American regional champions with a bye in the quarterfinals, while squads from regions such as Asia, Africa and Concacaf had to compete. Farias also dismissed the report that he had reached a one-year agreement to manage the club Al-Ahli in Jeddah, Saudi Arabia next season.

“I have two years remaining with Pohang,” he said. “I intend to fulfill my obligations with the club.”

With the win, Estudiantes will face the winner of the other semifinals match featuring FC Barcelona of Spain and Mexican club Atlante. On the same day, Pohang will play the losing team for a third place finish. Pohang will be shorthanded with three of its players sent off from yesterday’s match unable to dress for the game.