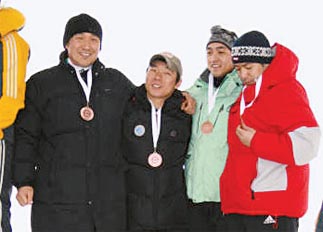 Korea’s bobsleigh team has emulated the Jamaicans of “Cool Runnings” fame and qualified for next year’s Vancouver Olympics for the first time.

The country’s four-man team, who have to train in Europe on borrowed sleds, qualified after a fifth-place finish at the America’s Cup at the weekend lifted them to a world ranking of 15 and earned them a ticket to Canada, Yonhap news agency reported.

Korea has no bobsleigh course and the team owns only two sleds for use in international competitions which they cannot afford to ship back and forth.

Pilot Kang Kwang-bae, who competed for his country in the luge at the last three Winter Olympics, said: “I’m so proud of my teammates. It’s an honor.”

Kang is still on the lookout for two more Koreans to replace a pair of Ukrainian teammates who have helped fill the sled in the absence of fit and able volunteers.

“I heard that a training site for bobsledding is currently under construction in [2018 Winter Olympic bid city] Pyeongchang. That will be a great help to us,” Kang told Yonhap.

Kang and teammate Kim Dong-hyun will also compete at next month’s European Cup in Turin in a bid to boost their chances of qualifying for the two-man bobsleigh event in Vancouver.