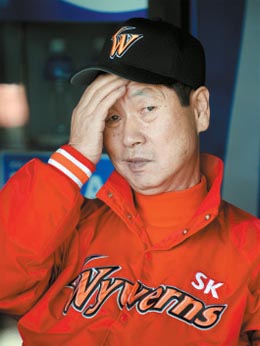 Some managers in the Korean Baseball Organization expressed their outrage yesterday at the league’s decision to retain the tie-as-loss system used last season in a meeting Tuesday.

At that meeting, all of the league’s eight directors voted in favor of keeping the system, which counts tied games as losses for the purposes of win percentages.

SK Wyverns manager Kim Sung-geun has voiced his discontent with the system on a number of occasions last season and continued yesterday.

“I’m disappointed and skeptical about whether the KBO takes any of the pending issues seriously,” said Kim. “I’m not merely speaking out on the issue surrounding the winning percentage calculations. It’s a big problem when the voices of managers and players are not considered during the league’s decision-making process.”

When the current system of recording ties as losses was introduced, it met the ire of many managers including SK’s Kim and Kim Kyung-moon of the Doosan Bears, who argued it was unfair to players. Many managers suggested going back to the previous system, which excluded ties from the total number of games played when calculating win percentages, or perhaps giving tied teams credit for half a win.At the previous general meeting in December, the vote was five teams against the system and three for.

So the unanimous vote in favor by all eight team representatives on Tuesday was a surprise.

The Lotte Giants and Samsung Lions directors both said afterward that they thought it would be most ideal, in the event of a tied game, to have teams play until an outcome was reached. But if that is not possible, the current system is the next best thing. KBO Secretary General Lee Sang-il said he believed the current system would be effective in preventing tie games.

But Kim of SK was unconvinced. “We saw problems with the system last year. I can’t believe they’ve decided to stick to the system again.”

Kim continued, “The league officials said the current system has been in place for only a year, and therefore decided to keep the system in place. I’m dumbfounded by this logic.

“If you notice a problem, the best thing to do is to recognize the problem and try to fix it.”

Despite several attempts, the league officials have failed to come up with a rule that is pleasing to all parties involved. How the league deals with ties has been changed twice since 2007. Up until 2007, ties were not counted towards the total number of games played when calculating winning percentages. In 2008, an unlimited number of extra innings were allowed for a winner to emerge, the system used in Major League Baseball.

According to SK’s Kim, while the Korean baseball program is among the world’s best, having won the Olympic gold medal at the 2008 Beijing Games and placed runner-up at the 2009 World Baseball Classic, its administrative work is second-rate.

“We must focus on attracting six million fans per season with the eventual goal of attracting 10 million with a solid foundation. I don’t know how the league plans on making progress without the ability to fix one rule. It only means the league officials do not put too much thought into the pressing issues,” Kim complained.