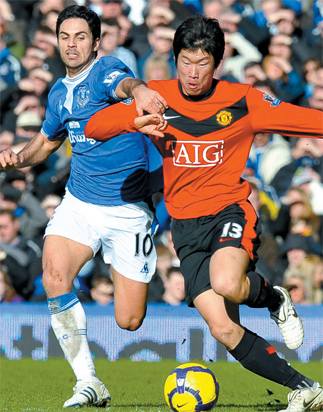 LONDON - Chelsea opened up a four-point lead at the top of the Premier League after Didier Drogba’s double inspired a 2-0 win at Wolverhampton and Everton claimed a 3-1 victory over Manchester United on Saturday.

Carlo Ancelotti’s Chelsea has often dropped points on its travels this season but in-form Drogba, who has six goals in five games since returning from the Africa Cup of Nations, ensured the Blues were able to take advantage of United’s slip.

In the day’s early kick-off, United looked lethargic after its mid-week victory against AC Milan and slumped to its first defeat in nine league games.

United fought to find momentum after that and David Moyes’s team took the lead in the 76th minute.

South African midfielder Steven Pienaar whipped over a low cross for substitute Dan Gosling to steer in just his second goal of the season.

Jack Rodwell ensured United would suffer its sixth league defeat of the season in the 90th minute as he surged away from Jonny Evans and drove his shot into the far corner.

“We were well beaten, simple as that,” Ferguson said. “We started the game well enough, but their goal galvanized them and gave them the incentive. This is a bad result and at this time of the year we can’t afford results like that.”

At Molineux, Chelsea struggled in the early stages but finally pieced together an incisive move to take the lead in the 40th minute. Yuri Zhirkov exchanged passes with Michael Ballack and the Russian crossed for Ivory Coast striker Drogba to slot home.

Drogba took his goal total for the season to 25 in the 67th minute when poor defending from Christophe Berra allowed him to reach Petr Cech’s long punt, round goalkeeper Marcus Hahnemann and drive in his 25th goal of the season.

Ancelotti said: “We went into this game knowing we had the chance to improve our position after the Manchester United result.

“The players were aware United had lost and we managed to take advantage of the situation but nothing is decided at this moment.”

Third-placed Arsenal are just two points behind United after a 2-0 win against Sunderland at the Emirates Stadium.

Arsene Wenger’s team made the breakthrough in the 27th minute when Denmark striker Nicklas Bendtner tapped in Emmanuel Eboue’s cross for his first goal since October.

Gunners captain Cesc Fabregas stroked home a 90th-minute penalty after the Spaniard was bundled over by Fraizer Campbell to leave Sunderland without a win in 11 league matches.

West Ham boosted their survival bid with a 3-0 win over fellow strugglers Hull at Upton Park.

Gianfranco Zola’s team got off to the perfect start as Swiss midfielder Valon Behrami fired home from Guillermo Franco’s flick in the third minute.

Hull midfielder Craig Fagan was sent off for a second bookable offence after tugging Alessandro Diamanti early in the second half.