Ready to hail the queen in Vancouver

Ready to hail the queen in Vancouver 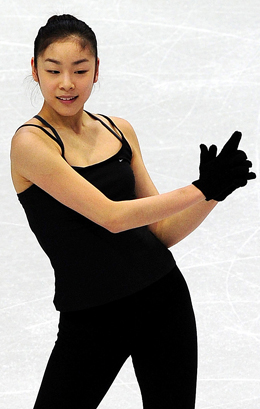 VANCOUVER - Women’s favorite Kim Yu-na practiced for the first time at the Vancouver Olympics on Saturday, but she isn’t talking about her chances of winning Korea’s first medal in figure skating.

Kim - or Queen Yu-na, as she is called back home - didn’t have much to say after her practices, in great part because the only questions allowed at a news conference were about her training and conditioning.

No such restrictions were placed on Brian Orser, the two-time Olympic silver medalist who coaches Kim in Toronto.

“I’m ready for her to skate her best and that’s what we are trying for,” Orser said. “I believe if she skates her best, she is unstoppable.”

Orser compared the attention Kim gets in Korea to “traveling around with Princess Diana” and praised his student for the way she handles the spotlight - and the demands that go with it.

“Now she needs bodyguards, and it’s really incredible,” he said. “They’ve embraced her and they love her and she’s very gracious about it. It’s fun, and I get to go along for the ride.”

That journey has been carefully mapped out for the 19-year-old. She arrived in Vancouver on Friday, a week after the opening ceremony. Kim began her on-ice preparation for tomorrow’s short program with two brisk workouts Saturday in which her jumps were smooth and her timing precise.

The most difficult challenge so far came when she was asked to translate her answers at a news conference in a tiny dressing room packed with media. One time, she rolled her eyes. Later, she feigned passing out.

“I have been training in Toronto, so there was no big jet lag,” Kim said. “I feel very comfortable on the ice and I tried to do the same as I was doing in Toronto and it worked. The ice feels very good, and I guess my first practice was very good.

“I feel a little more comfortable mentally ... with my programs.”

Kim’s rise has been meteoric in a sport mostly foreign to Koreans. Since bursting on the scene in late 2006, Kim won three Grand Prix finals and took the world title last March in Los Angeles. She hasn’t lost an event this season. Orser has played a huge role in that success, and he could make a difference for her in these games.

“She relies on me for advice, because I’ve had the experience with two Olympics, one in Canada with the ‘Battle of the Brians,’” Orser said of the 1988 Calgary Olympics, in which he was edged by Brian Boitano for the gold. “So she leans on me a little bit. I think she has a sense of relief that she knows I’ve been there and we can share this.” Despite the careful planning, Orser knew it was time to get his prize pupil to Vancouver. Kim watched much of the Games on a big screen TV set up in the training rink in Toronto. She would sneak a peek at the screen as she warmed up, and spoke with Orser about some of the routines.

Most inspiring was the victory of Evan Lysacek, 24, of the United States in the men’s event because - like Kim - he went into the Olympics as the defending world champion. Then he skated two super programs.

“I know she was very emotional about watching those performances,” Orser said.

When Kim performs, it often is the crowd that feels such vibes.

“The audience seems to be captivated by her style, grace, athleticism,” Orser said. “She’s beautiful and she’s everything you think of in figure skating. And she’s managed to be a very strong competitor.