Dongbu Promy dominates in game one of the KBL playoffs

Dongbu Promy dominates in game one of the KBL playoffs 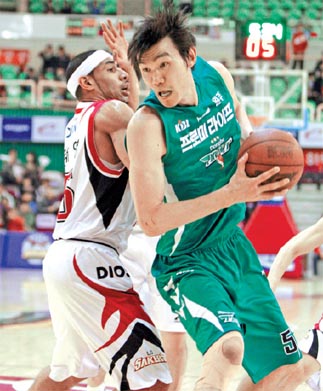 Kim Joo-sung of Dongbu Promy, right, spins past Moon Tae-young of LG Sakers during game one of the first-round playoff series Wednesday. [YONHAP]

Game one of the first round of Korean Basketball League playoffs can often determine the outcome of the best-of-five series.

In fact, 25 out of 26 teams that have won the opening game of the first-round playoffs have gone on to advance to the semifinals. That’s a whopping 96.2 percent.

So the odds are on Dongbu Promy’s side tonight, after it kicked off the first-round action on Wednesday with a gritty win over the LG Sakers in Changwon, South Gyeongsang. With the return of star center Kim Joo-sung, Dongbu pulled off a 79-69 win on the road.

With game two tipping off at 7 p.m. in Changwon, the Sakers will need to find a way to stop Kim. Wednesday’s game was the Dongbu center’s first since he injured his ankle at the end of last month.

Despite the layoff and being hampered by the nagging injury throughout the match, Kim posted the game’s best numbers, with 29 points and seven rebounds in 37 minutes 23 seconds.

“It hurt during the game, but now that the game is over my ankle is throbbing,” Kim said in a post-game interview.

“I didn’t want to dispirit my teammates by showing that I was in pain. I had to play anyway, so I wanted to play well.”

Dongbu can enter tonight’s matchup knowing it bagged the crucial game one on the road, but now it must find a way to distribute the ball. None of Kim’s teammates managed to score in the double digits. Center Jonathan Jones and forward Son Joon-young were the next-top scorers for Dongbu, with nine points apiece.

The LG Sakers have a monumental hill to climb, and the coaching staff will have to work on ways to improve the team’s offensive strategies. Moon Tae-young, who led the league with an average of 21.9 points per game during the regular season, was held to 11 points, 10 rebounds and five assists in game one.

“The game was over at halftime. Our players lack playoff experience and I’d been worried about that,” said LG head coach Kang Eul-joon.

“We didn’t have the mental edge today, but we’ll prepare for game two with the idea that we’re going the distance in the five-game series,” Kang said.

In the other first-round series, KCC Egis hosted Samsung Thunders in game one last night in Jeonju. Game two of that series will begin tomorrow at 5 p.m.