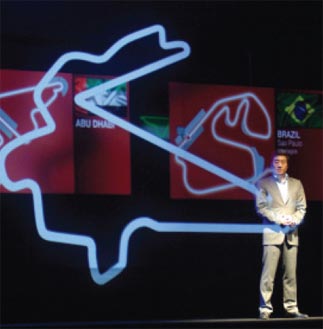 The long-awaited chance for Formula One racing fans is finally here.

Tickets to the Korea Grand Prix to be held in Yeongam, South Jeolla, in October went on sale yesterday at a launching ceremony at the Seoul Grand Hilton Hotel in central Seoul, at prices ranging from 117,000 won to 920,000 won ($103to $813).

While that might seem a little steep for some, the organizers of the global sporting event sounded confident about its standards.

“We decided on the price range by considering average income level and comparing it to the prices of international events such as the World Cup, the Olympics and other global sporting events, as well as the average ticket cost of F1 races in Asia and other places,” said a Korea Auto Valley Operation official.

“The F1 Korea Grand Prix final tickets are cheaper than the 2010 South Africa World Cup finals. And top seats at the F1 events in Singapore and Japan cost $1,183 and $1,079, respectively.”

KAVO has announced it will give a 10 percent discount to those who buy tickets this month.

KAVO said that it set its prices lower than other F1 or global sporting events for the simple reason that while Formula One is a hugely popular sport around the world, it has yet to catch on in Korea.

The organizers are hoping a reasonable price can attract fans to the stands and establish a strong following in the following seasons.

Formula One and KAVO will hold a practice session on Oct. 22, with preliminaries on Oct. 23 and the finals taking place on Oct. 24.

According to data released by KAVO, 600,000 people - roughly half the number targeted by organizers - surveyed in 16 major cities around the country said they would purchase tickets to the event regardless of the price.

The organizers are also hoping to attract roughly 250,000 to 300,000 visitors from abroad for the event.

Although Asian nations such as China, Japan, Singapore and Malaysia have hosted Formula One events in the past, this will be the first for Korea.

The government-subsidized project to host a Formula One Grand Prix event in Korea started in 2006 and Yeongam was granted one of the 19 Grand Prix spots by the sport’s governing body.

Yeongam has secured the annual Korean Grand Prix for the next seven years.

Tickets to the F1 Korea Grand Prix can be purchased through www.koreangp.kr.