Located in Nepal, Annapurna measures 8,091-meters above sea level and is the 10th highest mountain of the 14 eight-thousanders. Provided by Black Yak

It’s not an easy feat. Scaling even one 8,000-meter mountain requires dedication, perseverance and a passion for the sport. Climbing all 14 of the eight-thousanders is a feat for the elite in the field, and only a handful of women have even come close.

Oh Eun-sun’s love of adventure began in her high school years, when she started to take an interest in climbing. The Namwon, North Jeolla, native spent her youth in Gangwon prior to settling in Seoul, and she got her first taste of mountain climbing as a teenager.

Oh fell deeply into the sport during her university years. As an undergraduate majoring in computer science at the University of Suwon, she joined the climbing club, and was instantly hooked.

“I basically spent all my time between home, school and climbing with friends who were into climbing,” Oh has said about her college years. 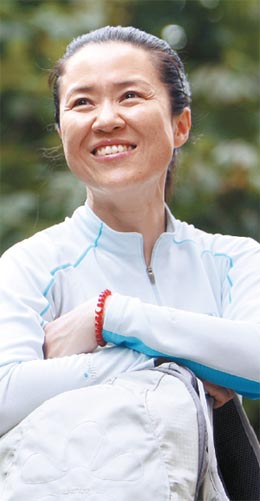 After graduating from university, Oh took a secure job as a Seoul City civil servant, but she quit without hesitation when she got the chance to accompany Ji Hyun-ok (1959-1999) on an expedition up Mount Everest in 1993. That year, Oh made it as far as Camp 3, 7,300 meters above sea level. She would finally summit Everest more than a decade later, in May 2004.

Oh’s first goal was to climb the Seven Summits - Kilimanjaro in Tanzania, Vinson Massif in Antarctica, Kosciuszko in Australia, Everest in Nepal and China, Elbrus in Russia, Mount McKinley in the U.S. and Aconcagua in Argentina, the highest mountains on the seven continents. In the process, she grew fixated with the idea of conquering the 14 eight-thousanders. 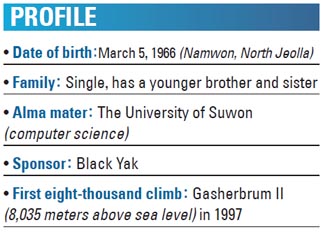 Oh scaled her first, Gasherbrum II in Pakistan, during the summer of 1997. It would take another seven years for Oh to conquer her second eight-thousander, but her confidence grew after she summited K2 (8,611 meters) in 2007.

“It [K2] suits me best,” Oh said in an interview at the time. “I think I can climb it without using oxygen tanks next time.”

She’s kept a hectic pace since then. Oh climbed four summits in 2008 - two, Makalu and Lhotse, within two weeks of each other - and she nearly outstripped her own record in 2009. Her final mountain, Annapurna in Nepal, would have been her fifth last year but she had to pull out in October because of heavy wind and fog.

It’s clear that Oh is no ordinary woman, but to get an idea of just how tough and determined she is, one need look no further than the feats she accomplished last year. In 2009, Oh became the first woman to scale four Himalayan peaks over 8,000 meters high in a single year without using supplemental oxygen, a climbing aid she used only when climbing Everest in 2004 and K2 in 2007.

Oh’s single-minded climb to the top has drawn controversy. One reason is the jaw-dropping speed with which she achieved her goal. Another is the deaths of other female climbers who have attempted the same feat.

Fellow Korean Ko Mi-young died after a successful ascent of her 11th eight-thousander on July 13, 2009. The 41-year old disappeared while descending from the Nanga Parbat summit in the Himalayas; her body was later found at the bottom of a cliff.

And Oh’s latest triumph was the site where Ji, with whom she first climbed Mount Everest and the first female Korean climber ever to scale the mountain, died.

“I will keep a photo of Ko in my breast pocket for my climb up Annapurna. I want to be able to share the moment with Ko, who was not able to reach her dream,” Oh said last year. “I will also climb with the thought of paying respects to the late Ji.”

Until Oh’s accomplishment yesterday afternoon, only 19 climbers, all men, had conquered all 14 of the world’s 8,000-meter summits, including three Koreans: Um Hong-gil, Park Young-seok and Han Wang-yong.

Three other women are close to joining their ranks: Edurne Pasaban of Spain, Gerlinde Kaltenbrunner of Austria and Nives Meroi of Italy. Meroi has conquered 11, Kaltenbrunner is at 12 and Pasaban is at 13 eight-thousanders.

There are those who say that it is more important to blaze new trails than to follow the tracks others have forged. And there are those who dispute Oh’s claim of using supplemental oxygen on only two of her summits. Reports on MountEverest.net say witnesses saw Oh using oxygen on Kangchenjunga, and Edurne Pasaban of Spain, who successfully completed her own 13th eight-thousander when she scaled Annapurna earlier this month, has raised questions about whether Oh finished that climb at all. 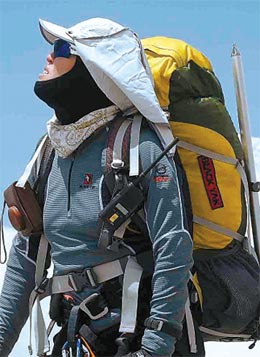 Pasaban has pointed to photos Oh provided from the summit of Kangchenjunga, saying that the pictures include a rock that does not exist at the peak and a blue rope which ends 200 meters before the summit. At a press conference last December, Oh tearfully denied the allegations, and a Nepalese Sherpa guide vouched for her claims. Since then, Agence-France Presse has reported that two of Oh’s three Sherpas have provided conflicting statements.

The conflicting claims will be sorted out later. Today, what’s certain is that Oh has tackled a difficult task and will be remembered as a tough and determined climber.