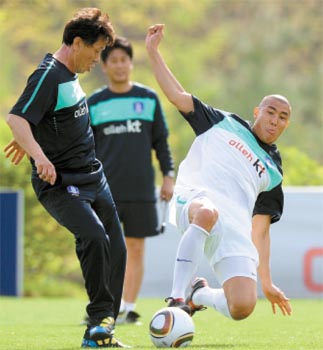 Cha Du-ri, right, attempts to break up a pass during a training session with the national football team at the National Football Center in Paju, Gyeonggi, on Monday. [NEWSIS]

Having joined the national football team training camp on Monday as a member of the 30-man World Cup preliminary squad, the 30-year-old right fullback is eyeing the camp and the friendly against Ecuador on Sunday as opportunities to impress manager Huh Jung-moo and the coaching staff.

Asked about his father, Suwon Bluewings manager Cha Bum-keun, who has been under a lot of pressure of late as his team struggles, Cha said: “They’re in last place, right?

“His goal is to win the AFC Champions League, so I’m hoping his team does well in that tourney.”

Recognized for his size, strength and speed, Cha is a physically gifted player. He is currently included in the 30-man preliminary roster but hasn’t secured a spot in the final lineup yet. While he was considered a strong candidate to make the final cut, a right hamstring injury took him out of nine consecutive games for SC Freiburg and while he was sidelined, Ulsan Hyundai’s Oh Beom-seok played well enough to strengthen his own case for right fullback.

Regardless, Cha is still confident about his chances.

“I’ve completely recovered from the right hamstring injury. But during rehabilitation training, I reinjured my left calf which was operated on in the past,” he said. “It was to the point where I had trouble walking without feeling severe pain. It took a while, but I’ve been participating in full training since 10 days ago.”

Cha showed flashes of potential when he was selected to the 2002 World Cup squad as a reserve forward as a Korea University student. There he was used as a forward and midfielder, but he didn’t produce many goals in those positions, and was switched to right fullback.

Making the switch from a position he was trained to play from an early age to a defensive position proved harder than expected. The transition was rough enough that Cha didn’t make the 2006 World Cup squad.

“I’ve become comfortable playing the right fullback position. I think I proved that in the Bundesliga,” said Cha.

“Oh Beom-seok is a good player and it would be hard to find someone to refute that. He also has experience playing in Russia. But if I try my best, I’m sure positive results will come out of it.”

In the past, Cha had more recognition as the son of a legendary forward who had a successful career in the Bundesliga and the national team.

But now that he has a 4-month-old child of his own, the defender is even more determined to make his own name.

“My daughter isn’t old enough to recognize me on the field, but I want to play in the World Cup for her,” Cha said.