Confident Korea is poised for a knockout

Confident Korea is poised for a knockout 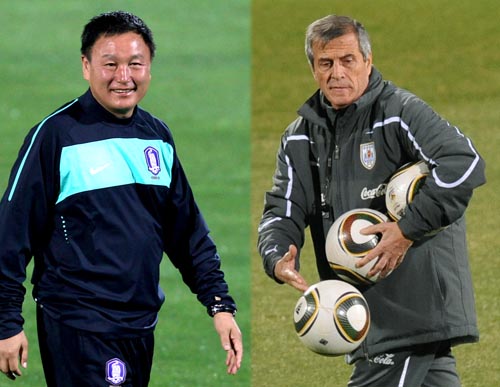 The first Round of 16 on foreign soil isn’t enough. The Taegeuk Warriors are hungry for a place in the quarterfinals.

But first they have to make it past Uruguay when they face off against the South American force in Port Elizabeth on Saturday starting at 11 p.m. (Korea time).

And they sounded confident about their chances of reviving the magical run of 2002, when Korea made its only other appearance in the knockout rounds at the Korea-Japan World Cup.

“Reaching the Round of 16 is a big achievement, but it’s not over yet,” said manager Huh Jung-moo after a team training session at Olympia Park Stadium in Rustenburg yesterday. “It’s a bit early to celebrate. We’ll fight for a spot in the quarterfinals.”

“We’ve reached our goal of getting into the Round of 16, but we’re not satisfied,” said captain Park Ji-sung.

Korea’s only other meeting against Uruguay took place at the 1990 Italy World Cup. Huh was then team trainer, and Oscar Tabarez was manager of the Uruguayan team - the same position he holds today. Uruguay would go on to win that match 1-0 on Daniel Fonseca’s header two minutes into injury time, and it was Tabarez who helped the team reach this year’s Round of 16 for the first time in two decades.

He sounded confident about Uruguay’s chances against the Korean defense.

“Korea is a physically fit team that’s well-organized,” Tabarez said at a press conference yesterday. “You never know what might happen in the Round of 16. But Korea has problems on defense and there’s no reason for us to lose the game.”

Despite Tabarez’s confidence, Uruguay has been a team of contrasts. At the regional qualifiers, Uruguay finished behind Brazil, Chile, Paraguay and Argentina, and only earned a spot in the World Cup after winning the playoff against Costa Rica. Uruguay finished the qualifiers with a record of six wins, six draws and six losses, scoring 28 goals but allowing 20 in the process.

But at the Cup, Uruguay has earned two wins and one draw in Group A. The team scored four goals and hasn’t allowed a single goal against the likes of Mexico, South Africa and France.

To upset the 16th-ranked South Americans, Korea will need its midfielders and forwards to outwork their opponents and cover a lot of ground against the Uruguayan defense.

“What makes Korean football unique is our ability to outpace and outwork our opponents,” said Park. “We’ve played three matches already, but that doesn’t mean it will have any effect on our style of play.”

The biggest area of concern for Korea will again be their defense, which couldn’t contain attack-minded Argentina and Nigeria in the group stage of the tourney. Next up for the Korean defensive unit are Diego Forlan and Luis Suarez, the former of whom is coming off a 28-goal season with Athletico Madrid in which the Spanish club placed runner-up in the league and won the UEFA Europa League title.

Huh is currently considering Cha Du-ri and Oh Beom-seok for the right fullback position. Oh is the better overall defender, but both have made glaring mistakes in the last two matches.

Another notable lineup change might be in goal. Jung Sung-ryong, who has earned the starting role in all three group matches, will get the nod. If the game goes into penalty kicks, Huh is expected to use Lee Woon-jae.

Huh and his assistants put Lee through a penalty-kick shootout scrimmage during yesterday’s training session in Port Elizabeth.

If Korea wins against Uruguay, it faces the winner of United States and Ghana in the quarterfinals on July 2.