The losses keep piling up for Kia

The losses keep piling up for Kia 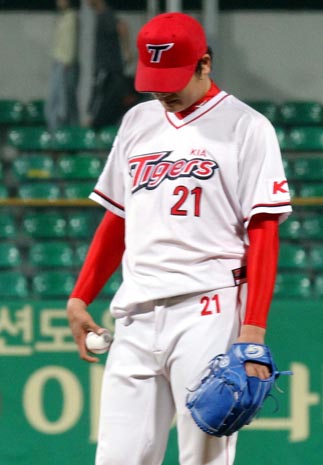 Kia Tigers relief pitcher Sohn Young-min hangs his head after giving up three runs in the top of 11th inning against the SK Wyverns on June 30. With key members of the Kia pitching staff injured or struggling, the entire team has suffered. [YONHAP]

Defending champions Kia Tigers are closing in on the all-time futility record of 18 consecutive losses. The Kia Tigers closed out their two-game weekend series in Daegu with a 5-3 loss against the Samsung Lions on Sunday. That bumps the team’s losing streak to 14 consecutive games.

It’s the longest losing streak for a team coming off of a Korean Series championship season. But to make matters worse, Kia is fast closing in on the all-time futility record of 18 consecutive losses, set by the Sammi Superstars between March 31 and April 29 of 1985. Upon completing the first half of the season, the Sammi were bought by Chungbo and the name was changed to the Pintos.

Of the eight KBO clubs, the Lotte Giants have the dubious distinction of having lost the most consecutive games. Lotte lost 16 consecutive games between June 2 and 26 in the 2002 season. The team closed out that season with a paltry record of 35 wins, one tie and 97 losses.

The Kia Tigers have 54 games remaining in the season and it’s still too early for them to give up on their postseason hopes. What the Tigers need to focus on, however, is their upcoming three-game series against the second-place Doosan Bears. Aquilino Lopez gets the call for Kia against Kelvin Jimenez in Jamsil, southern Seoul. 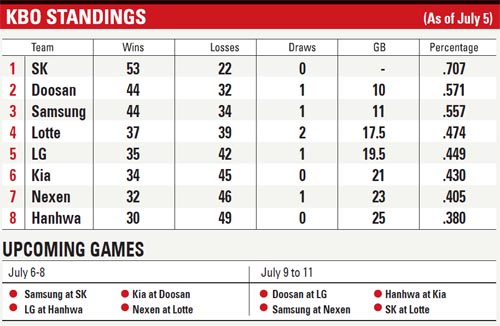 Although Lopez played a key role for the Tigers last year, posting 14 wins and 5 losses with an ERA of 3.12, he has struggled this season with one win, seven losses and 5.68 ERA. The biggest reason for the Dominican ace’s ineffectiveness on the mound this season is the team’s weakened rotation.

While Lopez, Rick Guttormson, Yoon Seok-min and Yang Hyun-jong made up one of the strongest rotations in the league, the departure of Guttormson in the off season and the loss of Yoon have put a big dent in the starting rotation. Yoon broke a finger on his throwing hand when he punched a locker room door after losing to the SK Wyverns on June 18 and will be out for six weeks.

Yang has been the lone bright spot on the Tigers’ rotation this season. The 22-year-old boasted a record of 10 wins and two losses going into Sunday’s game against the Samsung Lions, but in giving up five runs in one inning, he has failed to help his team break out of its slump.

The Tigers’ batting order has also been an obstacle. Last season’s Most Valuable Player Kim Sang-hyun has been hampered by injuries this year. Choi Hee-seop, with a respectable .304 batting average and 14 home runs, has missed four consecutive games due to chest pains. With the core of the team’s batting order struggling, the supporting cast of Na Ji-wan and Lee Yong-kyu has also failed to produce.

In contrast, the Samsung Lions are on a 10-game winning streak. This is the first time the Lions have managed to string together 10 consecutive wins since the April 2003 season. What makes the feat all the more impressive is that the team is not playing at full strength.

The core players in the Lions’ batting order - Choi Hyung-woo, Chae Tae-in and Park Sun-min - have struggled this season, but the team still produced an average of 5.8 runs per game during their 10-game winning streak.

“It’s strange but we just seem to perform better when our regulars get hurt or struggle,” said Seon. “Our goal is to reach the .500 win percentage mark by the All-Star break.”