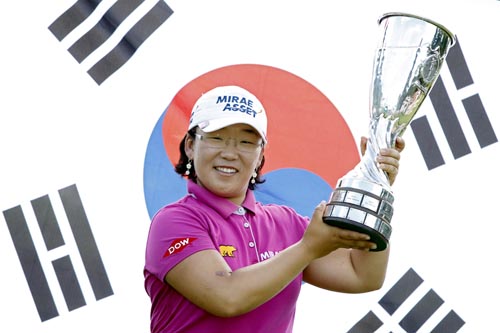 EVIAN-LES-BAINS, France - Shin Ji-yai birdied the 18th hole to win the Evian Masters on Sunday, shooting a 5-under 67 to finish at 14 under and one stroke ahead of Morgan Pressel, Choi Na-yeon and Alexis Thompson.

Shin’s fifth birdie in the final round put her one stroke clear of overnight leader Pressel, whose putt to force a playoff then rolled agonizingly over the hole without dropping in.

“On the final holes I realized I really could win. I became nervous and I put pressure on myself,” Shin said. “I did not manage a birdie on the 18th all week and I started to pray that I would do it today. I hit the last putt well and it went in.”

The 22-year-old Shin became the first Korean to win the Evian Masters and earned $487,500 for the win. She now has seven LPGA Tour victories in two years, winning her first at the British Open in 2008.

“I hope to be the first of many [Korean winners],” she said. “I love this tournament. It is my favorite one and the place I like best, so I am really happy to have won it.”

Shin briefly held the No. 1 world ranking for seven weeks after Lorena Ochoa’s retirement earlier this season. She had an emergency appendectomy just six weeks ago and only recently returned to competition.

“I have completely recovered because I don’t feel any more pain,” Shin said. “The break did me a lot of good because I needed to rest, to stay at home and watch others play.”

Pressel (70), who started the final round two strokes clear, walked over and hugged Shin after missing her putt.

Pressel’s downhill putt from the right of the green gathered speed, and she sank to her knees when it rolled over the hole - giving her a share of second with Na-yeon of Korea (66) and the 15-year-old Thompson from the United States (67).

“It was close. It looked like it was going in and it just sneaked out,” Pressel said. Suzann Pettersen of Norway (66) was fifth at 12 under. Defending champion Ai Miyazato (68) finished tied for 19th at 5 under.