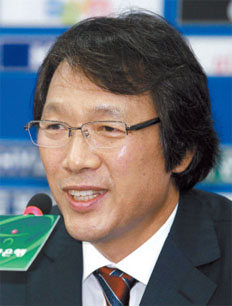 
National football team manager Cho Kwang-rae unveiled a roster peppered with young talent, speedy players and an ample amount of defenders for the Aug. 11 friendly against Nigeria in Suwon.

The roster reflects Cho’s desire to shore up the national team’s shaky defense and create an up-tempo team that incorporates quick, short passes in the midfield ahead of its match with the Super Eagles.

“With the national team faring well at the World Cup, the expectations of our fans have increased as well,” Cho said at a press conference yesterday. “In order to meet those expectations, we needed to undergo some changes. I selected young players with potential for growth.” 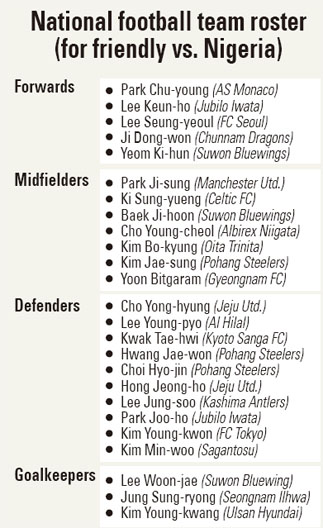 Cho shrugged aside the notion that national teams should shy away from having too many young, unproven players. “Some critics might state that the national team is no place to nurture prospects,” he said. “But I think the players I selected are quick, talented and fully capable. In order to play the up-tempo style of football that I want, we need intelligent midfielders who click with their teammates and possess good passing skills.”

The weakest link on the 2010 World Cup squad was the defense, and Cho looked to tackle it head on by adding 10 defenders to his 25-man roster. For the upcoming match against Nigeria, the new national team manager plans on switching to a three-man defensive style from the four-man strategy employed by his predecessor, Huh Jung-moo.

“It’s not possible to improve the skill level of individual defenders in a short span of time. I plan on improving our team defense through a shift in formation,” stated Cho. “I will go with three defenders against Nigeria. When we’re on the attack, the central defender will move up to take on the role of a defensive midfielder.”

Cho has also called on 12 overseas-based players as well as eight players from Japan. The most notable names left off the roster were veteran forward Lee Dong-gook and midfielder Lee Chung-yong.

“Lee Dong-gook is a good player. But I’m looking for more of an active player with strong passing abilities,” Cho said. “If Lee improves his conditioning, there’s always a possibility that he will return to the team in the future.” Lee Chung-yong, Cho said, has requested to stay and train with his club in England.

Despite early reports of Nigeria bringing its top players, injuries and club commitments have resulted in a weakened roster. Cho has been able to gather his top players for his debut as the national team manager, but time - or lack thereof - is his biggest concern.

“We will have two days to prepare for the match,” as the team won’t start practicing with all its players until Monday, Cho said. “With players returning from their club commitments, they will be fatigued.”

The friendly against Nigeria will be veteran goalkeeper Lee Woon-jae’s retirement match from the national team.