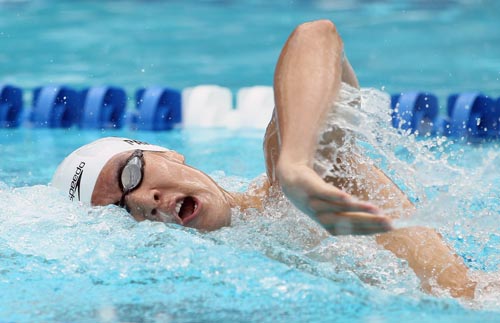 Park Tae-hwan swims in the men’s 200-meter freestyle event during the Mutual of Omaha Pan Pacific Championships at the William Woollett Jr. Aquatic Center on Wednesday in Irvine, California. [AFP/YONHAP]


IRVINE, Calif. - Park Tae-hwan showed signs of recovery from a disappointing 2009 season by placing second in the 200-meter freestyle event at the 2010 Pan Pacific Swimming Championships in Irvine, California, yesterday.

On the opening day of competition, the 21-year-old posted his season-best time of 1:46.27 in the 200-meter freestyle event. Park’s personal-best time in the event is 1:44.85 - an Asian record - that he posted en route to winning the silver medal at the 2008 Beijing Olympics. Although he was 1.42 seconds off his personal best, it’s a positive sign for a swimmer who finished 13th in the event with a time of 1:46.68 at the World Championships in Rome last year.

Park looked especially strong in the early phases of the race. Having finished the first 50 meters in third, Park overtook his competition and led the pack with the time of 51.45 seconds after the 100-meter mark. Ryan Lochte of the U.S. overtook Park in the race starting at the 120-meter mark and went on to win with the time of 1:45.30, but Park held on to finish the race in second place. Park had finished fifth in the fourth heat in 1:47.85 to enter the finals with the sixth-best time out of eight.

“I wasn’t totally pleased with the results, but I will try my best in the finals,” Park said after the heat.

It was a physically demanding day for the young swimmer because he also competed in the 1,500-meter freestyle event, but Park sounded unconcerned about wearing down.

“I spent a lot of time going over various aspects of competing in two events in a day with my coach Michael Ball,” said Park.

However, Park hit a slump last season when he crashed out of the 2009 World Championships in Rome by failing to qualify for the finals of the 200-, 400- and 1,500-meter freestyle events. Park is still reluctant to speak about the event that took place in Rome last year, but he has said he wants to “enjoy swimming more than anything.”

“My biggest goal at this point is to produce time in the neighborhood of my personal best records,” said Park.

Park is set to compete in the 400-meter freestyle event.

As a quadrennial event, the Pan Pacific Swimming Championships - featuring the world’s top non-European swimmers - is considered one of the top swim competitions next to the Olympics and the World Championships. With the 2010 Guangzhou Asian Games coming up in November, as well as the 2011 World Championships in Shanghai, China, and the 2012 London Summer Olympics, Park is on a positive start toward regaining his confidence