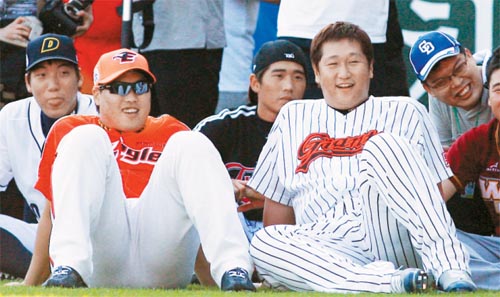 Lee Dae-ho, right, and Ryu Hyun-jin take in the Home Run Derby at the 2008 KBO All-Star game. By Lim Hyun-dong


Looks can be deceiving. Whoever said overweight athletes can’t dominate at the professional level obviously has not seen Lee Dae-ho of the Lotte Giants and Ryu Hyun-jin of the Hanwha Eagles in action.

Lee, an infielder, and Ryu, a southpaw pitcher, have been the two most dominant players in the Korea Baseball Organization this season. Lee is listed at 192 centimeters (6 feet 3 inches) and a hefty 130 kilograms (287 pounds) and, at 187 centimeters and 110 kilograms, Ryu has an equally imposing presence on the mound.

The two players may look overweight, but their production on the field is breaking the perception that plump athletes are not agile enough to perform at an elite level in a professional league. Lee is leading in all offensive categories this season, hitting .364 with 41 home runs, 121 RBI and 90 runs scored. The only category in which Lee is not ranked in the top five is stolen bases. Speed is obviously not a strong suit for the infielder, and Lee has failed to steal a single base this season.

Ryu has posted 1.64 ERA with 15 wins, four losses and 179 strikeouts. The player has been an elite pitcher in the KBO since his rookie season in 2006, but he has been mowing down competition for the woeful Eagles who sit dead last in the league standings with the record of 42 wins, one draw and 71 losses.

According to the body mass index (which measures body fatness based on a calculation of one’s weight and height) both players are considered overweight. Lee measures in at 36.62 while Ryu at 28.02. However, Lee’s skeletal muscle mass measurement provided by the Giants is measured at 135 to 140 percent. It’s better than the 125 percent average for athletes.

“Lee’s reflexes do not pale in comparison to some of the top athletes in weightlifting and judo,” said Giants trainer Lee Jin-oh.

According to team statistics from 2008, Ryu’s body fat was measured at 22 percent.

“Ryu’s body fat has dropped to 19 percent this season,” said Eagles trainer Cho Dae-hyeon. “Ryu topped out at 2008, but I oppose Ryu going on a diet. Nonathletes who are considered healthy measure in at 15 percent and overweight folks are measured at 30 percent.”

“The figures from a body mass index are not an accurate indication of one’s health when it comes to athletes due to their muscle mass,” said Kim Yong, director of Jaseng Hospital of Oriental Medicine. “Players with bigger frames are better disposed to produce a burst of explosive power. With a stable lower body anchoring the entire body, there can also be an increase in accuracy in addition to power.”

Experts say that carrying a lot of weight can put a lot of strain on the body and comes with health risks. Knees, ankles and the back are most susceptible to injury risks.

“Without even realizing it, the spinal cord shape and body type can change for those carrying a lot of body weight,” said Cho Gye-chang of Jaseng Hospital of Oriental Medicine. “

Cho said 1 kilogram of additional weight is equal to 3 kilograms of additional pressure on the joints. Such pressure can cause ruptured ligaments and tendons. Lee suffered a torn cartilage in his left knee during the 2002 season and had to undergo surgery.