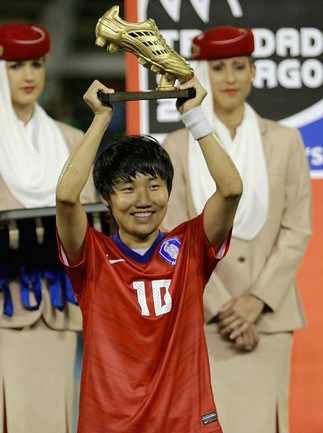 Yeo Min-ji secured her place in sports history by becoming the first Korean to win both the Golden Boot and the Golden Ball while helping Korea to its first win in a FIFA-sanctioned football tourney during the U-17 Women’s World Cup.

“I don’t think I did well as an individual, and I want to accept these accolades on behalf of my teammates,” Yeo said in a post-game interview.

With Japan’s defense focusing heavily on containing Yeo, the forward failed to deliver a goal in the finals but still managed to become the top scorer in the tournament with eight.

“I was in a lot of pain today but tried to set such distractions aside and play to the best of my abilities,” Yeo said. “I want to work on my shortcomings and build on my experience at the World Cup to become a better player.”

Yeo’s feat is all the more impressive when considering she has yet to fully recuperate from knee surgery. Having torn a ligament in her right knee in middle school, the Haman Daesan High School junior reinjured the same knee this year and had surgery on it again just two months ago.

The 17-year-old forward was not in top physical shape but still managed to deliver timely goals and played a crucial part in Korea’s U-17 Women’s World Cup win in Trinidad and Tobago.

Yeo scored two goals and added an assist after entering the opening match against South Africa as a substitute in the 27th minute. Korea won the match 3-1. Yeo started the next game and scored a goal in Korea’s 4-1 rout over Mexico.

While Korea was shutout 3-0 against Germany, Yeo exploded in a four-goal performance in a thrilling 6-5 win over Nigeria in the quarterfinals. In the semifinals, with Spain leading the game by a goal, Yeo hit an equalizer, helping Korea to a 2-1 win.

“My goal is a big one: I want to be the best women’s player in the world,” Yeo told FIFA.com. “I want Korea to become a major force not just in Asia but in the world.

“I sensed that this dream was beginning to come true when we scored our winning penalty kick, and it made me cry.”

U-20 squad forward Ji So-yun scored eight goals to help Korea to a third-place finish at the U-20 Women’s World Cup in August, finishing second on the list of top scorers and ending up with the Silver Boot and Silver Ball awards.

The only other player to gain recognition at a FIFA-sanctioned tournament is current U-23 national squad manager and former national team captain Hong Myung-bo.

The defender won the Bronze Ball at the 2002 Korea-Japan World Cup for his role in helping the Taegeuk Warriors reach the semifinals.