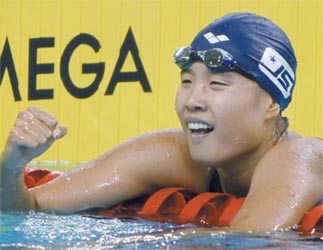 Choi Hye-ra, pictured, and her teammate Lee Joo-hyung, both won the most valuable player award at the National Sports Festival yesterday. [YONHAP]

Korean athletes appeared ready for the upcoming Guangzhou Asian Games, having made their presence felt at the National Sports Festival, which closes on Tuesday.

The one-week multisport festival, held in Jinju, South Gyeongsang, and its nearby counties last week, has provided a glimpse into the country’s gold medal prospects ahead of Asia’s biggest sports showpiece that starts on Nov. 12.

Three Olympic judoka showed why they are gold medal favorites at Guangzhou.

Choi Min-ho, who won gold in the men’s 60-kilogram division at the Beijing Olympics, claimed the national championship in the men’s 66-kilogram class with two straight ippon victories.

“I intended to check athletes’ conditions here at Jinju, and they are all in good form,” national judo coach Chung Hoon said. “They are all determined to grab gold at Guangzhou. We will achieve the best results if we keep working hard and prepare well for the games.”

Archers were also on a roll at Jinju. The final of the men’s individual event on Saturday was a showdown between veteran national-team archers Im Dong-hyun and Oh Jin-hyuk.

Im, the reigning world champion and a two-time Olympic gold medalist, won the duel by hitting the bull’s-eye 11 times out of 12.

The other finalist, Oh, set a world record in the preliminary 30-meter round on Friday, shooting a perfect score of 360.

“They are not 100 percent yet, but they are improving now,” said coach Kim Seong-hoon, who aims to sweep all four gold medals in archery at Guangzhou. “All national archers reached the semifinals here. I’m not worried about them.”

Swimmers, too, have been on record-breaking pace at the competition, gaining the limelight before heading to Guangzhou next month. And despite Olympic gold medalist Park Tae-hwan skipping the national event, six national records were set in swimming, most of them by national team members.

On the other hand, athletics and shooting face grim prospects for the gold medal hunt at Guangzhou.