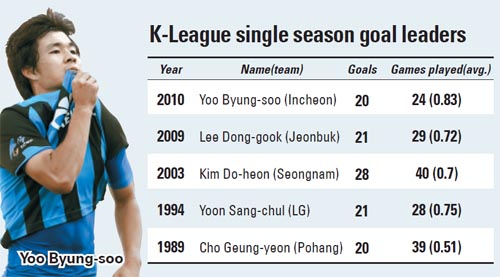 The sophomore slump has been a nonfactor for Incheon United forward Yoo Byung-soo.

Coming off an impressive rookie season in which he scored 12 goals to finish second in voting for the Rookie of the Year award, Yoo has scored 20 goals in 26 games for Incheon United in his second year.

In becoming only the fifth player in the history of the K-League to notch 20 goals in a single season, Yoo has all but secured the top spot in goals scored this year. And there are four more games to play.

Yoo has set his target at 23 goals, which means he will have to notch three more in the remaining four games, but considering Yoo’s scoring average is 0.83 goals per game, he has a good chance to hit his target.

If Yoo somehow manages to score eight goals in the remaining four games, he can tie Kim Do-heon’s record 28 goals in the 2003 campaign, and raise his average to one goal per game.

As difficult as that sounds, Yoo has a shot at reaching the seemingly improbable mark. Yoo scored a hat-trick on two different occasions this season and has proven to be a streaky player who can turn up his game a notch and score goals in bunches.

Yoo scored all four of Incheon’s goals in a 4-0 win against the Pohang Steelers on April 18. He then went onto score in four consecutive games to net nine goals in five games.

“We’re nearing the end of the season, but it feels as if I’m feeling better physically as the season progresses,” said Yoo.

Yoo attributed some of his success to his coach, Huh Jung-moo.

“I was able to score more goals off free-kicks this year,” Yoo said. “Since Huh was named our new manager, I’ve become more assertive in my positioning and movement without the ball and when playing defense.”

Drafted first overall out of Hongik University in the 2009 Amateur Draft, Yoo immediately earned a starting spot on the Incheon United roster and competed with Kim Yong-hoo of Gangwon FC for the Rookie of the Year award last season. Yoo ended the season one goal short of Kim’s 14.

However, with another strong performance this season, Yoo achieved his goal of making the national football team when he suited up for Korea in a friendly match against Japan in Seoul on Oct. 12.

“The international friendly against Japan was a memorable one and I have the uniform stored away in a safe place at home,” he said.

Cho Kwang-rae has managed the national team to a 1-1-1 record in three friendly matches, but has yet to settle on the winning combination of forwards to lead Korea’s attack.

The biggest concern for Korean football fans at the moment is who can step up to support Park Chu-young.

“Although we play the same position, we can play well together,” Yoo said. “It wasn’t an official game, but I had a chance to play with Park at a charity game after the 2010 World Cup and it worked out fairly well.”

Yoo and Park were involved in all three goals and went on to defeat Hallelujah FC, 3-1.