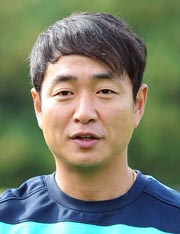 National women’s football team manager Choi In-chul is focused on leading his team to its first-ever Asiad gold in Guangzhou, China, this month. Having led the U-20 women’s squad to a surprising bronze medal finish at the 2010 U-20 Women’s World Cup in Germany, Choi is looking to lead his team to another improbable finish.

Choi took over the women’s national team in August after his successful stint with Korean U-20 this summer. Choi led the Taegeuk Ladies to two draws and a 2-0 win over Australia at the Peace Queen Cup last month in Suwon, Gyeonggi. The women’s national football team is set to play Vietnam, Jordan and China starting on Nov. 14 at the Asian Games.

Leading his team through its final stretch of training in Mokpo, South Jeolla, Choi is busy running drills for his players. But Choi is also concerned about media attention for certain players.

“It would be nice if our captain Jun Min-kyung or Hong Kyung-suk could be interviewed,” Choi said. “Ji So-yun has been interviewed a lot and she’s badly in need of rest at this point. It would be nice for the players in their mid-20s to receive media attention.”

In managing a team competing in an underfunded women’s sport, Choi is fully aware of the difficulties his players face and the obstacles he has to overcome.

“In all honesty, women’s football is not the only underfunded sport in Korea,” Choi said. “I hope we can make progress and set an example for all other sports lacking support.”

Choi has been recognized for his work with the national women’s squad this year and has been nominated for FIFA’s Manager of the Year for Women’s Football. Of the 10 nominees, Choi and Japanese national team manager Norio Sasaki are the only Asians on the list.

“It would be a great honor to receive the new award but I’m just happy to have been included on the list of nominees,” said Choi. “I hope Ji can win Women’s World Player of the Year. I want to accompany Ji to the ceremony in Switzerland in January as her chaperone.”

Choi has been at the helm of the women’s national team for three months but has set a gaudy goal for himself and his players: a gold medal at the 2010 Asian Games.

“Luckily, we weren’t grouped with North Korea or Japan in the group stage of the tourney,” said Choi. “But we will have to face them.”