Speedy midfielder from China signs on with K-League club

Speedy midfielder from China signs on with K-League club 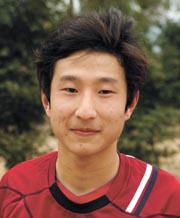 GUANGZHOU, China - Speedy midfielder Bai Zijian reached his goal of signing on with a K-League club and the 19-year-old midfielder has Daejeon Citizens officials excited about their find in China.

Bai, an ethnic Korean born in China, whose named is pronounced Baek Ja-geon in Korean, defeated tough odds in the past to earn a spot on the Chinese Super League’s Chongqing Lifan FC.

“In order to secure a place with a professional team in China, it’s more important to have the right connections than what you’re capable of producing on the field,” said the 19-year-old. “It wasn’t easy but I was able to secure a tryout with Chongqing because I knew an older player on the squad.”

Despite having earned a spot on the Chongqing reserve squad, Bai’s excitement at becoming a professional football player and advancing within the Chongqing system was dashed rather quickly.

Disgruntled players and assistant coaches worked together to oust manager Li Shubin from the club. On the surface, Chongqing’s stagnant record was the reason, but in actuality, those with close ties to the team say Li was let go because of the growing resentment among players who felt they weren’t getting the playing time they deserved.

It was a tough blow for Bai and he was told by his outgoing manager to try and catch on with a K-League club if he wanted to develop into a successful football player.

In the Chinese Super League, it’s often difficult for even a talented player to flourish unless he has a good rapport with the manager and the coaching staff.

“The culture of professional football here is different in that it’s not uncommon for players to pressure managers off the team,” said Kim Jin-won of JC Village, who organized Daejeon’s offseason overseas training in Guangzhou. “Managers often don’t have a lot of power since they constantly have to take into account the opinion and attitude of the assistants and players.”

It’s the biggest reason why Li told Baek to try his talent in Korea prior to leaving the club.

Born to a Korean father and an ethnic Korean mother in 1992, Bai was looking to take his services to Korea when he earned a tryout with the Daejeon squad, which was conducting its offseason training camp in Guangzhou.

Having quit football in middle school to compete as a sprinter on his school’s track team, Bai can run the 100-meter sprint in 10.6 seconds. Bai dazzled the Daejeon coaching staff with his blazing speed during the tryout.

Daejeon manager Wang Sun-jae was immediately smitten with the young forward’s speed on the pitch.

“Since we have limited spaces on the squad for overseas Asian players, it wasn’t an easy decision,” said Wang of Bai’s signing. “But with his speed, we can utilize Bai as an offensive spark off the bench in the second half.”