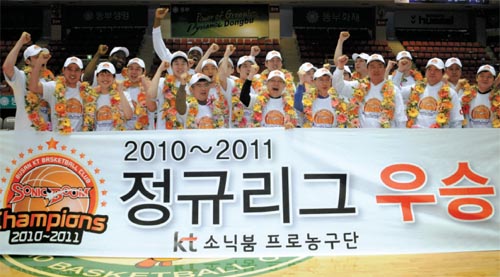 Busan KT Sonic Boom players and coaches pose for a celebratory photo after winning the KBL regular season title Sunday. It was the Sonic Boom’s first league title since the team’s establishment in 2004. [YONHAP]


The Busan KT Sonic Boom made the unthinkable possible Sunday when it wrapped up the KBL regular season title by beating the Wonju Dongbu Promy on Dongbu’s home court, 87-67.

The Sonic Boom didn’t have a star player or even a player with experience winning a title, but head coach Jeon Chang-jin led his team to its first regular season title since the Sonic Boom was established in 2004.

This was only Jeon’s second season coaching the Sonic Boom but he was a star coach at Dongbu for three years until 2009, when he decided to “jump into a new challenge” with KT.

The Sonic Boom had never really been a contender this season, with experts saying the team’s shorter average height and lackluster rebounding would condemn it to failure.

Jeon refused to let the team fail. When he moved to one of the worst teams in KBL he pushed each player hard, hoping they’d find new passion for the game.

Before the 2010-2011 season started, KT was expected to be somewhere in the middle of league but injuries and other losses made things even more dire. Things eventually started to turn around when Jeon released injured Jasper Johnson, even though the team seemingly needed his power and height.

“Johnson showed signs of stamina problems when we made it to the playoffs last season,” said Jeon at the time of Johnson’s departure. “Instead of relying on Johnson’s skillset and watching him play anyway he wants, I want to break through our situation with strong teamwork.”

Jeon is known to get angry when players perform individual stunts instead of acting as part of the team. Jeon also conducted one of the most vigorous offseason training camps in the KBL last year.

But there’s another side to the coach that some might not see. He regularly chats with his players and takes them out to dinner, allowing them to confide in him and talk about anything.

“His knowledge on how to motivate players to play is probably the best in the league,” said Samsung Thunders coach Ahn Joon-ho.

“When there’s a gap on the court, each KT player runs very hard to fill that gap. I would like to learn how he makes his players do that.” Added ET Land head coach Yoo Do-hoon.

Jeon though was a little more humble.

“I never expected the regular season title to come into our hands this quickly,” said Jeon after Sunday’s game. “This victory will remain with me until the end of my coaching career.