Park struggles and gets demoted again

Park struggles and gets demoted again 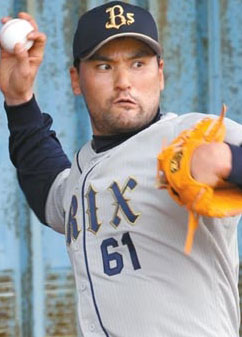 Korean pitcher Park Chan-ho might be having his most difficult season ever.

The former MLB starter was demoted to Japan’s minor league for a second time on Monday after another poor outing for the Nippon Professional Baseball (NPB) league’s Orix Buffaloes on Sunday.

Park, 38, who holds the record for most wins in the MLB by an Asian pitcher, with 124, was the losing pitcher in Sunday’s game against the Chunichi Dragons, after allowing six runs on nine hits in 3 1/3 innings.

“I made careless pitches in the second and fourth inning,” Park told Japanese sports daily, Sports Nippon, after the game against the Dragons. “I tried to stay in the game but it’s too bad that I couldn’t.”

It was the first time Park was pulled from a game before the fifth inning since he moved to Japan this year. The right-hander now has a 1-5 record and a 4.29 ERA in seven starts.

For the Buffaloes coaching staff, Park’s poor performance is more than disappointing.

The Japanese club, which currently sits at the bottom of the Pacific League standings, had big hopes when they signed Park but his performance has been worse than expected and criticism against the pitcher is getting harsh.

This is Park’s second time getting demoted to the minors in Japan - he got dropped the first time after losing to the Fukuoka Softbank Hawks on May 11. After spending 11 days in the lower division, Park was brought back up and pitched a six-inning three-hit shutout against the Yomiuri Giants. After that game, Giants manager Tatsunori Hara praised Park, saying “our hitters were suppressed by Park’s major league force.”

But his disaster of a performance against the Dragons on Sunday was perhaps the final straw for Orix manager Akinobu Okada. He set conditions when he first sent Park to the minors three weeks ago, but this time there was no mention of forgiveness from the 54-year-old manager, which means Park’s stay in the minors could be a long one.

“Park was easily beaten even when he led the count with two strikes,” Okada told Kyoto News after the game on Sunday. “I don’t know if he will get another chance or not.”

Losing the coaching staff’s trust could be the final blow for Park. When he came to Japan this year after ending his 17-year career in the MLB, the pitcher knew he would have to impress in the NPB.

But after less-than-stellar outings and recent comments made by the coaching staff, Park may no longer be desirable. Some around the league are even saying Orix could pick up a new foreign pitcher because the NPB doesn’t have a quota on the number of foreign players a team can sign.

Baseball experts say Park’s dreadful performances can be attributable to poor command. Park has struggled to locate his breaking ball this season, often throwing it up in the strike zone where opposing batters can hit it with authority.

Meanwhile, the Buffaloes said starters Chihiro Kaneko and Kazuki Kondo have both come back from injury and will fill the void left by Park’s demotion.