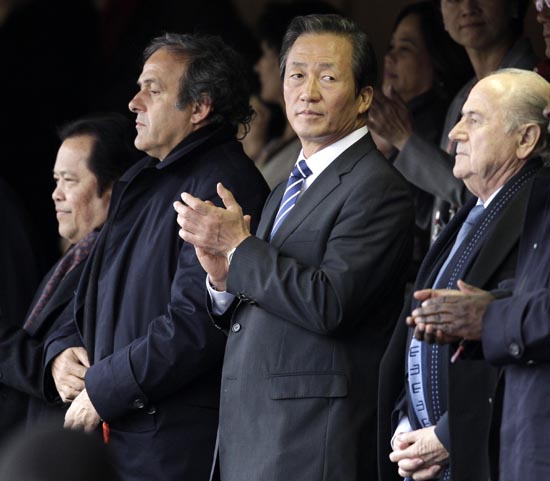 Chung made the criticism in a memoir published in Korea last week, titled “My Challenge, My Enthusiasm.’’

Chung had been regarded as a leading candidate to succeed Blatter as FIFA president before being defeated in an Asian election for the FIFA vice presidency early this year.

The book hits stores as Blatter prepares to present detailed anticorruption reforms in October after a year of scandal that has rocked world football.

“President Blatter is fluent in five languages, has a good way with words and is intelligent ... but I think he is not an international gentleman and he is like a little brat,’’ Chung said in the book.

Chung, who served as a FIFA vice president for 16 years, accused Blatter of trying to usurp the authority of FIFA’s executive committee via his proposal to create an oversight, anticorruption panel that could include former U.S. diplomat Henry Kissinger and opera singer Placido Domingo.

“[The FIFA] executive committee is an independent organ aimed at performing the roles of ‘checks and balance’ to prevent the president from going beyond his own authority.

“Blatter is now attempting to take away the power of the executive committee and neutralize any effort to check his power,’’ Chung wrote. “It’s a similar scheme that so many dictators have used in world history.’’

Chung also said that Blatter had unsuccessfully made a series of unrealistic, wild proposals, such as holding the World Cup every two years rather than every four and moving the goalposts to help allow more scores.

“Those proposals ... only triggered unnecessary friction and confusion,’’ he wrote.

FIFA said Monday it would not comment on Chung’s memoir.

Blatter has long been a magnet for criticism, but the 75-year-old Swiss was elected unopposed earlier this year to a fourth term as FIFA president.

His challenger, Mohamed bin Hammam, withdrew on the eve of the vote amid allegations that he tried to bribe Caribbean voters in his campaign to unseat Blatter.