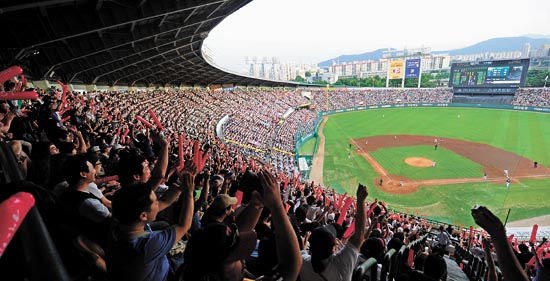 Fans cheer during a baseball game at Jamsil Stadium in Seoul on Tuesday when it surpassed the six-million attendance mark. [NEWSIS]


The Korean Baseball Organization announced yesterday that it has surpassed the six-million attendance mark for the first time since the league was founded in 1982, buoyed by improved performances, better marketing and global visibility. It’s a significant milestone for the league, which pulled in a total of 2.5 million people for the 2001 season, 3 million in 2006 and 5.92 million in 2010. Attendance for this year’s season, which runs from April to October, was 6.05 million as of Tuesday, the KBO said.

Experts say one of the most important factors in improved attendance is the strong performance of popular teams that have struggled to get to the top.

“The success of popular teams such as the Lotte Giants, LG Twins and Doosan Bears is important because they are located in the country’s biggest cities,” Lee Sang-il, the KBO’s secretary general, said.

The Giants, based in Busan, topped attendance records in the regular season with 1.2 million as of Tuesday, followed by the Twins with 1.09 million and the Bears with 1.1 million. The latter two teams are based in Seoul.

“Korean baseball players have performed very well at world-class events such as the Olympics and Word Baseball Classic, and that has certainly brought in more fans to watch star players in action,” Lee said.

Another factor boosting attendance is entertainment, with performances at opening ceremonies by K-pop stars such as T-ara.

“I go to baseball stadiums not only to watch the games, but also to enjoy the entertainment,” Choi Jun-young, a baseball fan, said. “Seeing pop stars sing the national anthem and opening ceremonies are also attractions for me.”

One of the most successful events of the season thus far was a recent “kiss time” event, a tradition at Korean baseball games in which several couples are urged to kiss while being shown on the giant electronic display board. When President Lee Myung-bak and the first lady, Kim Yoon-ok, kissed during this event earlier this month, it was a big hit among baseball fans.

Baseball’s growing popularity has also resulted in an increasing number of news articles about the sport, which in turn has kept it in the public eye.

According to an official of Naver, Korea’s leading Web portal, baseball content takes up 15 percent of all news traffic on the site, dominating all other professional sports news. Kang Joon-ho, chairman of the Sports Industry Research Center at Seoul National University said teams have moved beyond their original function as advertising for their owners but that there is still room for improvement.

“Professional sports teams no longer act solely as publicity for their owners,” Kang said. “But they should invest more in improving stadiums, by installing more seats for example.”