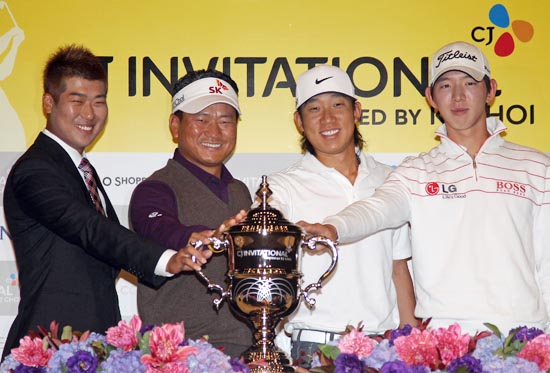 
Korean golfer Choi Kyung-ju will host his own tournament on home soil for the first time this week, bringing together stars from both the Korean and U.S. tours.

The CJ Invitational hosted by K.J. Choi, the more famous moniker for the eight-time winner on the PGA Tour, will kick off at Haesley Nine Bridges in Yeoju, about 105 kilometers (65 miles) south of Seoul, tomorrow. It will be the first golf tournament held in Korea bearing the name of an active golfer.

The K.J. Choi Foundation and Asian Tour Media jointly created the event in May this year; the Korean Golf Tour (KGT) and the Asian Tour will co-sanction the tournament.

“At this tournament, I want to play with young players with potential and give them a stepping stone,” Choi said. “There are a lot of things to take care of as both a player and the host of the event. I will try to do my best and hopefully that will lead to a great result.”

The 41-year-old Choi, the first Korean man to win on the PGA Tour, is largely considered the greatest male golfer from the country. He’s enjoyed a banner year in 2011, highlighted by his win at The Players Championship, the tour’s richest tournament with a winner’s prize of $1.71 million. He is ranked fourth on the PGA Tour money list this season with more than $4.4 million and is 14th in the world.

With the Korean company CJ as the main sponsor, the four-round tournament will offer $750,000 in total prize money. CJ said it will run Choi’s event for three years.

Choi will be joined by Anthony Kim, a three-time PGA Tour winner and a rising Korean-American star, and Noh Seung-yul, the reigning money champion on the Asian Tour.

Kim, one of the invitees, said he was “honored” to play in Choi’s first event.

“He’s an epitome of what a Korean golfer should be,” Kim said. “He’s a well-respected man. I am trying to follow in his footsteps. Hopefully I can put on a good show in his first tournament.”

Hong Soon-sang and Park Sang-hyun, second and third on the KGT’s money list, will also be in the field.

In golf tournaments in this highly digitized country, players, local and international, have often complained of excessive cell phone noise in the middle of their swings, though fans are told to keep their devices away. The PGA Tour only started approving mobile devices on a limited basis this year, provided fans use them in selected areas.

Asked if the measure would be too harsh for fans, Choi said it would be ultimately good for the players, who should take center stage in any tournament.

“Typically, I think half the fans [at a Korean event]take pictures, and that really affects playing,” Choi said.

“Golf tournaments should revolve around players inside the ropes. It’s something that the galleries should consider. We can’t forcefully confiscate devices but I ask fans to refrain from using them during play to ensure good golf.”