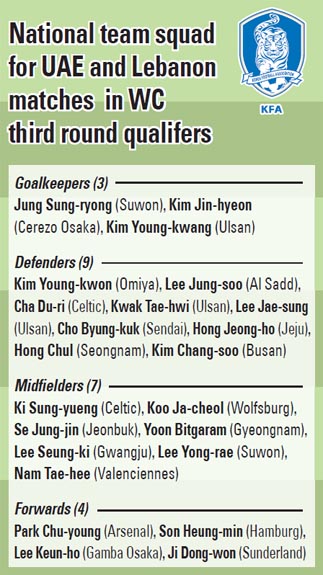 Teenage striker Son Heung-min is back on the Korean national football team for two World Cup qualification matches in the Middle East next month, despite some controversy surrounding his availability.

The Korea Football Association (KFA) yesterday unveiled a squad of 23 players for the third round of Asian qualification for the 2014 FIFA World Cup in Brazil. Korea will travel to the United Arab Emirates (UAE) on Nov. 11 and then to Lebanon on Nov. 15.

Son, a dynamic 19-year-old playing for Hamburger SV in Germany’s Bundesliga, was recalled for the tough away games. Earlier this month, after Son only played 17 minutes as a substitute against the UAE in Korea, his father, Son Woong-jeong, pleaded with KFA officials not to pick the player for the national team for the time being.

The senior Son said his son was still trying to fit in with the German club and it wasn’t an ideal situation for the youngster to make long trips for national team games to play only 17 minutes.

But Cho Kwang-rae, head coach of the national team, had responded earlier that personal feelings of a parent wouldn’t affect the selection process, and said yesterday he doesn’t foresee any trouble with the Son family.

“I can completely understand why Son’s father got emotional over the issue,” Cho told reporters. “Son has played well every time he joined the national team, so he should be fine. He has been peaking as of late and I expect big things out of him over those two games.”

There are five groups of four teams in the third round. Teams play each other twice until early next year, and the top two teams from each of the groups will reach the fourth and the final round.

Among other notable players, striker Lee Dong-gook, No. 2 scorer in the domestic K-League, was left out of the squad for the away matches due to a left calf injury. Veteran wing back Cha Du-ri is back with the team after recovering from a thigh injury.

Cho said he didn’t want to make major squad changes ahead of the critical games.

“I tried to keep the team intact so that players can build more cohesion,” he said.