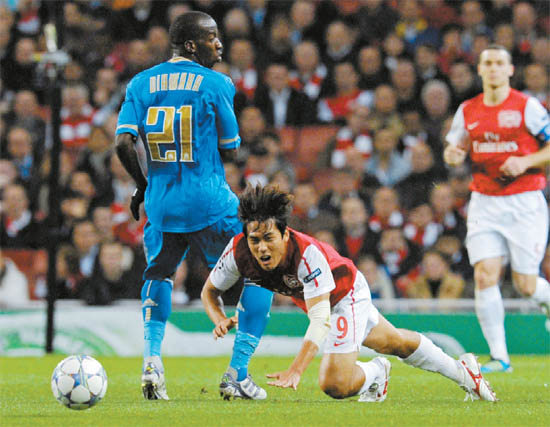 Arsenal’s Park Chu-young, center, competes for the ball with Marseille’s Souleymane Diawara during their Champions League Group F football match at Emirates Stadium in London on Tuesday. The game ended in a 0-0 draw. [AP/YONHAP]


PARIS - AC Milan and defending champion Barcelona both reached the last 16 of the Champions League on Tuesday, but Premier League giants Arsenal and Chelsea were made to wait to secure qualification.

Arsenal, 5-3 victors at Chelsea on Sunday, needed victory at home versus Marseille to book their place in the knockout phase but they were held to a goalless draw.

Park had scored his debut goal for Arsenal during last week’s League Cup win over Bolton, but found the going hard on Tuesday.

All too often promising Arsenal attacks broke down when the ball reached the Korean, with the 26-year-old often needing one touch too many or miscontrolling altogether.

“He did very well for us last week,” Wenger said. “But tonight you could see he lacked a bit of the pace of the game. He’s not played enough games.”

By the time Wenger replaced Park with van Persie, who had scored a memorable hat trick against Chelsea, Arsenal’s challenge had already begun to fizzle out.

“It’s difficult to be at your maximum three days after a big match,” explained Wenger. “Marseille played a good, very solid match and I think their point was not undeserved.”

The result preserved Arsenal’s one-point lead over second-placed Marseille in Group F, while Borussia Dortmund resurrected their qualifying hopes with a 1-0 win at home to Olympiakos.

Chelsea was held to a 1-1 draw at Belgian champions Genk, although Valencia’s 3-1 defeat of Bayer Leverkusen meant that the Blues would not have been able to qualify in any case.

Chelsea had thrashed Genk 5-0 in their previous encounter at Stamford Bridge but they were made to rue Luiz’s miss just after the hour when Jelle Vossen swept home the equalizer from Fabien Camus’ cutback.

“At the moment, it’s not happening for us,” said Chelsea coach Andre Villas-Boas. “It’s a fixture I wanted to win. With a draw, not everything is negative but we could have done better.”

Valencia scored the second-fastest goal in competition history against Leverkusen, with Jonas netting after 10.6 seconds at the Mestalla - 0.3 seconds slower than Roy Makaay’s effort for Bayern Munich against Real Madrid in 2007.

Stefan Kiessling drew the German side level in the 30th minute, but Roberto Soldado flicked home Jeremy Mathieu’s cross to restore Valencia’s lead in the second half before Adil Rami made it 3-1 with 15 minutes to play.

Chelsea now lead Leverkusen by two points at the top of Group E, while Valencia’s qualification hopes have been rekindled as they are now just a point beneath the top two ahead of a home game with Genk on Nov. 23.

The Argentine broke the deadlock from the penalty spot in the 24th minute, after Marian Cisovsky had been sent off for bringing him down.

The spot-kick took Messi’s tally for the club to 200 goals and his second goal, in first-half injury time, was his 50th goal in 2011.

Cesc Fabregas headed home in the 72nd minute, with Messi completing his second hat trick in the space of four days - after Saturday’s triple against Real Mallorca - in injury time.

The win sent Pep Guardiola’s side two points above Milan in Group H, after the Italian champions’ earlier 1-1 draw at BATE Borisov, but means that both the heavyweights in the group can now look forward to the round of 16.

Zenit Saint Petersburg are a point behind APOEL in second place after a 1-0 win at home to Shakhtar Donetsk.